Myth of the Week: Atalanta

As a child reading myth-books, I found heroines to be thin on the ground.  I’ve written before about how much I loved the goddess Athena, but I also yearned for powerful female mortals as well.  Unfortunately, my early myth books contained only one such woman.  The good news?  It was Atalanta, and she was straight-up amazing. 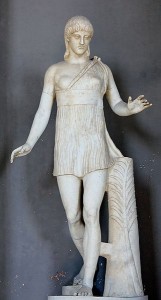 Atalanta was born the daughter of a king, but her father, who had wanted a son, exposed her to die in the wilderness. Instead, she was adopted by a mother-bear, who nursed and raised her.  Atalanta grew up to be a master hunter and athlete, particularly known for her fleetness of foot.  She was supposed to be so simultaneously beautiful and terrifying that all who saw her were struck dumb. She could hold her own against any man, and her name itself is the perfect retort to her father’s prejudice: it means “of equal weight.”

I didn’t have much in common with Atalanta–I was horribly slow when we ran laps in gym class, and the thought of hunting animals horrified me–but that didn’t stop me from loving her.  I especially appreciated the fact that she never went begging back to her ungrateful father, but chose to go off and make her fortune as a free hero. The first proof of her mettle came when she was attacked by two brutal centaurs, and single-handedly killed them both. 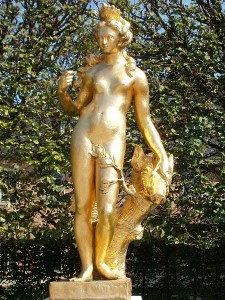 A golden Atalanta, with the Calydonian boar's head at her side.

Next she joined the Calydonian Boar hunt, organized for all the greatest heroes of the day.  Atalanta didn’t strike the fatal blow against the monstrous animal, but she was the first to wound it, and in honor of her courage, the hero Meleager awarded her the boar-skin.  Not everyone was pleased with this decision, and it ended up leading to Meleager’s death.  A story for another time!

Thanks to her prowess with arms, Atalanta was also invited to join Jason and his Argonauts in their quest for the Golden Fleece.  Sadly, after being listed as one of the heroes involved, she doesn’t really figure in any of the rest of the adventures.  It would be interesting to read an account of the whole myth from her perspective—there’s a novel in that, for sure! 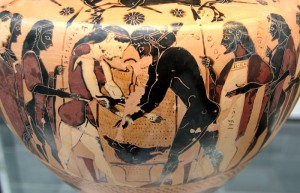 One of my favorite stories about Atalanta is her famous wrestling match with Peleus, Achilles’ father.  As some of you may know from my book, Peleus was quite the wrestler—strong enough to have beaten the goddess Thetis.  But when Atalanta challenged him?  She defeated him thoroughly, and their bout became a popular scene in art.

Thanks to her growing fame, Atalanta’s father decided that, actually, he wanted his daughter after all.  He formally acknowledged her, then exercised his paternal right to marry her off.  Atalanta, enraged, said that first her suitors would have to beat her in a footrace.  If they lost, they would be put to death.  Atalanta’s ruthless father thought that that sounded just fine—he’d still get to keep their courting gifts, after all.

Several (I can’t help but think foolish) young men decided to try their feet against Atalanta’s.  All of them lost until a young man named Hippomenes (or Melanion in other versions), prayed to the goddess of love, Aphrodite, to aid him.   She gave him three magical, golden apples from the Garden of the Hesperides, and told him that if he threw them to the side during the race, Atalanta would be sure to go after them, allowing him to beat her. 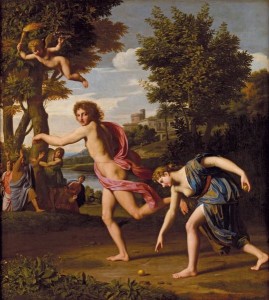 Atalanta, stooping to pick up the golden apple, as Hippomenes runs ahead

When I was really young, this part of the story baffled me, because it seemed so out of character for Atalanta to care about gold.  After all, this is the same woman who grew up roughing it and drinking bear milk, with no need for princess-comforts.  It wasn’t until I got older that I understood that the apples were the ultimate symbol of heroic distinction—retrieving one is even one of the labors of Hercules—and they would have tempted any serious fame-hungry hero.  Her desire to have them is of a kind with her desire to display the Calydonian boar-skin she won.

Aphrodite’s cheat works, and Hippomenes wins the race.  For some reasons, Atalanta doesn’t seem to hold it against him—perhaps she approves of his cleverness, as well as his athleticism.  Further, he seems to appreciate her: rather than trying to turn her into a traditional ancient wife, the two become comrades in hunting together.

In my childhood myth-books, this was where the story always ended, which gave me the impression that Atalanta’s life concluded happily.  Some years later, I was startled to discover that there’s more to the tale—a bizarre and racy ending that goes like this: Atalanta and Hippomenes are out hunting one day when they are overcome by intense desire for each other.  In some versions this is because Hippomenes didn’t properly thank Aphrodite for her help with the golden apples, and the goddess is getting her revenge.  In others it’s simply because they are in love.  They begin coupling, and are so distracted by pleasure that they don’t notice that they are lying together within the bounds of a god’s temple (depending on the version, the god could be Aphrodite, Zeus, or even the Eastern goddess Cybele).  Sex in a sanctuary was considered blasphemous pollution, or miasma, as the Greeks called it, and punishment was swift.  The angry god/goddess turns the two of them into lions as punishment.  The End. 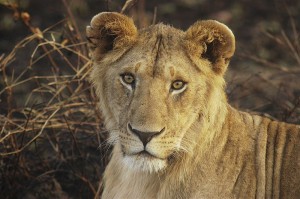 A lion. Photo by Wwelles14

Strange, right?  And hard to parse, I think, beyond the obvious message: don’t have sex in a temple.  The only consolation is that at least the god/goddess picked an appropriate animal–I think the punishment would have been a lot worse if the famous, beloved huntress had been turned into, say, a chicken.

I just can’t close this myth without mentioning Marlo Thomas’ “Princess Atalanta” story from Free to Be You and Me.  I don’t know about you, but I listened to that tape over and over and over again as a child.  Here’s the animated version with Marlo Thomas and Alan Alda (!) doing the voices.

By the way, thanks to everyone for their comments about last week’s Greek etymology post.  I promise there are more like that coming!