My apologies for the longish absence–a lot has happened since my previous post, including finishing a new story (more on that soon), lots of book-touring and also hunkering down with the rest of the East Coast to weather Hurricane Sandy.  As it turned out, we were incredibly lucky up here in Boston, and didn’t lose power at all–though I did go for a walk in 50 mph winds, which isn’t an experience I’m going to soon forget.  But the devastation in New York and New Jersey is absolutely staggering, and many people are still, a week later, without heat, shelter or food.  The emergency workers there have done an incredible job, but there is still much to do–not to mention in other communities that Sandy hit, like Haiti and Cuba.  A good time to consider a donation to the Red Cross, or other first-responder organization.

October was a month of Book Festivals, and I had the good fortune to attend some truly amazing events and meet lots of terrific authors–including the lovely Joan Wickersham and Justin Torres, the hilarious Michael Perry, and dynamite debut author Karen Engelmann.  My must-read list is longer than ever now (just the way I like it) and I’ve started with Joan’s new book of stories, “The News from Spain,” which is one of the most beautiful, piercing things I’ve read in a long time.

A particular highlight was the Boston Book Festival, where I got to hear Junot Diaz speak about the short story, along with Edith Pearlman and Jennifer Haigh.  Here I am waiting in a VERY long line for that event! 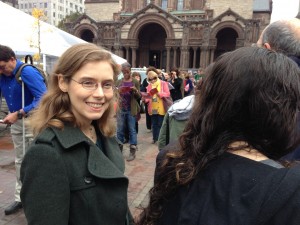 I also had an event of my own: a conversation about The Song of Achilles and the Iliad with David Elmer, an incredibly gracious Classics professor from Harvard.  Lots of great, Homeric conversation, followed by a signing. 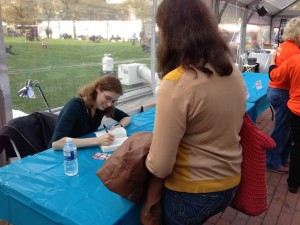 And speaking of Homeric conversation, I thought I would pass on this piece that Classics graduate student Hamutal Minkowich, at the University College of London, wrote in response to her reading of The Song of Achilles, and a conversation we had in London.

Hope that all of you are safe, warm and dry–or will be very, very soon.