I’m sitting in the Boston airport as I type this, waiting for my flight to London to attend the Orange Prize shortlist reception and start my UK paperback tour.  Very exciting!  It seemed like the perfect time to post something on etymologies (isn’t it always a good time for etymology?)  And hopefully next week I’ll be back with a myth as well.

Those of you who follow this blog know my feelings about snakes, but this is such a great etymology that I couldn’t resist.  Herpetology, or the study of reptiles, snakes and amphibians, comes from the ancient Greek “herpo” which means to creep, crawl or slither.  In other words, Herpetology is “the study of creepers.”  Interestingly enough, in the ancient world, this didn’t just mean snakes and their ilk.  The Greek noun herpuster could refer to a reptile or a crawling child. Hmmm. 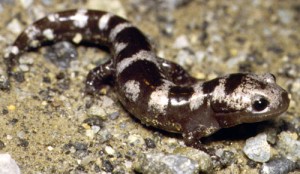 What really makes this etymology cool is the fact that the “h” sound in Greek very often became “s” in its Latin counterpart.  So “herpo” became “serpo,” also meaning to slither.  And from there we, of course, get our English word serpent.  Other examples of the “h” to “s” change include hept- (Greek root for seven) and Latin sept-, as well as “hals” which is the Greek for salt, which becomes Latin “sal.”

Thersitical.  This one isn’t really etymology, but eponym. Thersitical, which means loud-mouthed, rude, and foul, is named after Thersites who was a loud-mouthed, rude and foul character in the Iliad.  He’s the only common soldier who dares to stand up to the kings and tell them what he really thinks; in return, Odysseus beats him savagely.   He also plays an amazing role in Shakespeare’s Troilus and Cressida, where he steals every scene he’s in with his bitter, angry and hilarious diatribes against the hypocrisy he sees around him.  Among many other acid observation he notes that “Agamemnon is an honest fellow enough…but he has not so much brain as earwax” and that Achilles has “too much blood and too little brain.”  In his most famous line, he sums up the Trojans and Greeks alike: “lechery, lechery, still wars and lechery.  Nothing else holds fashion!” 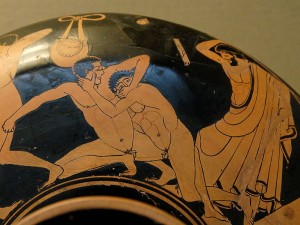 Two fighters in an all-out agon. Photo by Marie-Lan Nguyen

In its modern English usage, agony has come to be an exclusively negative word, but in its original Greek sense, it simply meant “contest”—most often in the physical sense.  A boxing match, for instance, was an agon, as was a race—any situation in which contestants strove to beat each other.   From this we also get the word “antagonist” which originally just meant opponent—the person against you in the agon.  So, although agony is something you suffer in English, I prefer the Greek, where it seems like something you can fight, and maybe win.

Atom.  This is a very old word, used by Greek and Roman philosophers to refer to the smallest particles imaginable—the foundation stones that built everything else, and so were themselves “unsplittable”—from “a” (not) and “tomos” (cut).  Of course, nowadays we know that atoms can be split.  But I like that the name remains anyway—in homage to the amazing ancient philosophers who had the foresight to imagine that the world was made up of things they couldn’t see.

Epicurus, an ancient Greek philosopher who taught about atoms.

Gallimimus is a ostrich-like dinosaur, whose name is actually Latin, from gallus, meaning chicken, and mimus, meaning mimic—but Latin mimus is itself derived from the Greek mimos, which means an actor or mimic, so I felt like it still counted.  And, of course, our word “mime” also comes from it.  For all you Jurassic Park fans out there, Gallimimus makes a brief cameo in the first movie: “they’re flocking this way!” 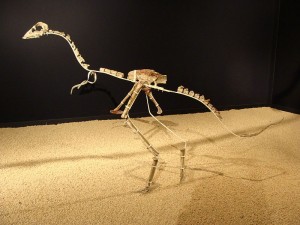 I wish you all a wonderful week and (those in the US) a great Memorial Day weekend!