Cambridge is once again snow-bound, and it seemed like a good time to post some updates on the last few months which have been excitingly action-packed. As some of you may know, I had the opportunity to attend not just one, but three literary festivals in India in the past few months. 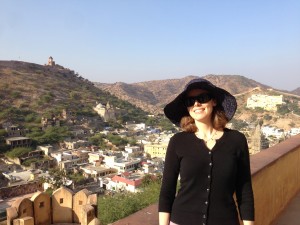 Me, hat, and the sunny view from Jaipur’s Amer fort. Don’t be fooled: temperatures were in the 40’s and 50’s.

The first was the Times of India Literary Carnival in Mumbai, where I had an event with the brilliant scholar Arshia Sattar, one of the pre-eminent translators of the Ramayana, moderated by the dynamic and gracious Devdutt Pattanaik who is as enthusiastic as I am about mythology. We discussed ancient Greek and Indian epic in front of a delightfully passionate audience. As I’ve mentioned previously, I love reading both the Ramayana and Mahabharata, and always find it fascinating to see the similarities and differences between their stories and the stories of the Iliad and Odyssey. 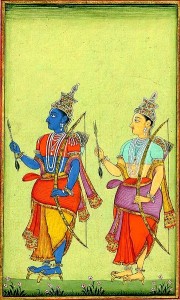 The hero Rama and his loyal brother Lakshmana

The Iliad and Ramayana share an earnest, young hero who makes some disastrous decisions (how disastrous, in the case of Rama, is still debated), while the Odyssey and Mahabharata share an emphasis on trickery and mischief, personified by Odysseus and Krishna respectively. One of my long-time ambitions has been to learn Sanskrit so I can read these texts in their earliest versions, and this has only made me more determined to do so.

Next up was the grand dame of Indian Literary gatherings, the Jaipur Literature Festival, founded by the amazing William Dalrymple. It was an absolutely wonderful time, filled with brilliant panels and enthusiastic audiences. I found myself scrambling to cram in every session that I could, and still felt like I missed half of all the literary riches on offer. The many memorable events included a lecture by the delightful Oxford professor, Faramerz Dobhoiwala, on his non-fiction book The Origins of Sex, which offers insights into how the Enlightenment led directly to the sexual revolution. I also loved the packed event on The Jewish Novel, with Linda Grant, Gary Shteyngart, Howard Jacobson and Andrew Solomon. Four very different voices, all fascinating. A few days later, I had the pleasure of hearing Andrew Solomon again, this time on the “Literature of Love and Longing” panel, which focused specifically on LGBT voices in literature. My own events were likewise a treat, since I got to share the stage with Devdutt for a second time, and lots of other literary luminaries, including the historian Tom Holland, Linda Grant, Jeet Thayil and Lawrence Norfolk. All of the festival’s events were taped and are available on Jaipur’s website, which I highly recommend. 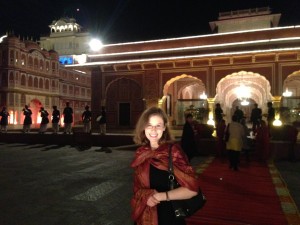 The Man Booker International party, at the Jaipur city palace. Not pictured: elephants and camels, greeting us.

And, of course, I couldn’t mention Jaipur without mentioning the fabulous parties in the evenings, including the Man Booker International Prize celebration in honor of its newly shortlisted authors.  There were a number of names I didn’t know on the list, something I hope to remedy soon, but I always cheer to see Marilynne Robinson recognized, and Lydia Davis as well.

Aside from the bookish pleasures of the trip, I very much enjoyed getting to tour around Rajasthan. The forts and palaces were gorgeous, and I took particular delight in Jodhpur’s Mehrangarh fort which has a small but excellent museum. Some of its highlights included an ornate peacock howdah, or elephant seat, as well as a gallery of paintings from the miniature school. Also, a vivid collection of daggers, including the one in the center below, which has a special spring-loaded three-prong blade which leaps apart after you’ve stabbed someone, to provide maximum damage. Yikes. 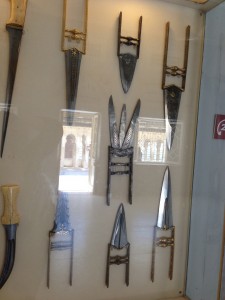 Display of Indian katars or “push daggers” including the three-bladed nasty mentioned above.

Jaipur itself also has a wealth of historical sites, including the Amer fort and an amazing astronomical installation called Jantar Mantar. Built by the Maharajah Jai Singh II in the 1700’s, it features a huge sundial that tells time to within TWO SECONDS. The shadow falls on the curved wall which is marked with numbers. 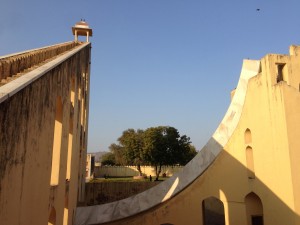 And then there were the gorgeous temples. I particularly loved Ranakpur, a beautiful Jain temple which has 1,444 columns, all of them different. The marble carvings are absolutely beautiful, and I couldn’t resist this demon-head at the entrance. 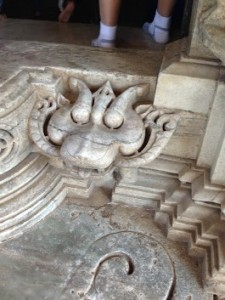 Demon-head at entrance to Ranakpur Temple.

Last of the three was the Kolkata Literary Meet, where I shared an event with the artist and author Amruta Patil, whose graphic novel Adi Parva is the first in a series of planned works retelling the Ramayana. It’s excellent.

It was an unforgettable trip and I’m so grateful I had the chance to go. Next up: a post on the wonderful students I had the pleasure of meeting in California, as well as some exciting news about hats. (Yes, hats). I hope that those of you in the current snowbelt are safe and snug. Happy almost-spring!