Myth of the Week: The Danaids

I wrote this series of myth-and-classics posts several years ago, and finally decided to collect them all in one place. I have plans to add to these sometime in the near future. If you have characters you’d like to see me write about, drop me a line!

It’s great to be back!  Lots of news to share, including the US paperback release (tomorrow!), and upcoming events in both the US and UK.  But first, the story of the Danaids, or Fifty Brides for Fifty Brothers.

The Greeks didn’t have a hell the way we think of it, but they did have Tartarus, a region of the underworld where ancient bad eggs were sent to suffer eternal torments.  It had several famous inhabitants, including Tantalus, Sisyphus and Ixion, each condemned for heinous crimes against the gods: Tantalus killed his son, cooked him into a meal, and then tried to trick the gods into eating it.  Sisyphus likewise mocked and deceived the gods, and Ixion attempted to rape the goddess Hera.  For his offense, Tantalus was condemned to raging thirst and hunger, with food and drink eternally just out of reach (the origin of our word, tantalize).  Ixion was suspended on a flaming wheel.  Sisyphus had to push a huge rock up a hill, which would inevitably roll back down just as he reached the top. 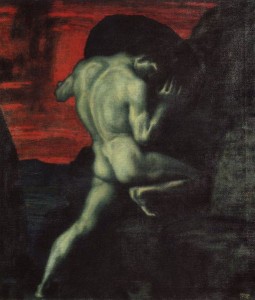 Sisyphus and his rock

But it wasn’t only men who ended up in Tartarus.  In Roman legends, there were also 49 women there, the daughters of a man called Danaus (hence their name, the Danaids, daughters of Danaus).  Their crime wasn’t against the gods but men: they murdered their husbands on their wedding night.  In order to wash the blood from their hands and be absolved they must fill a tub with water–a tub with holes in its bottom.   Forgiveness, in other words, is impossible. 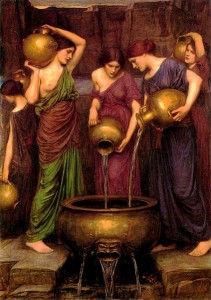 The Danaids trying to fill their tub

The Danaids didn’t start out murderers.  Their father, Danaus, was a prince of Egypt, son of the great king Belus, who was in turn descended from Io—the Io who was turned into a cow and chased by a gadfly to Egypt.  One of the things that I find interesting about this story is how the ancient Greeks casually grafted their own mythology onto Egypt’s, claiming that the throne of mythological Egypt was ruled by Greeks. 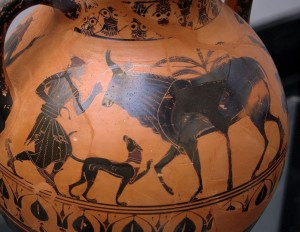 Io as a cow, with Hermes on the left

Danaus and his twin brother Aegyptus were heirs to the Egyptian throne.  Danaus had fifty daughters, and Aegyptus fifty sons.  The two brothers fought incessantly over who was to rule, and eventually Aegyptus threatened Danaus, demanding that he marry off his daughters to Aegyptus’ sons.

Angry and frightened, Danaus fled with his daughters to Greece, with the fifty sons in hot pursuit.  Once there, Danaus seemed to have a change of heart, and agreed to the marriage.  How they decided which daughter would marry which son is unfortunately not in any version I could find.  Perhaps the method of distribution didn’t make the record because it was far less juicy than what followed: Danaus had only agreed in order to revenge himself upon his brother.  In secret, he gave each of his daughters a knife and commanded them, on their collective wedding night, to kill their husbands.  Forty-nine of his daughters obeyed, and dispatched their new spouses.  But the fiftieth, Hypermnestra, had fallen in love with her husband, Lynceus, and instead helped him escape. 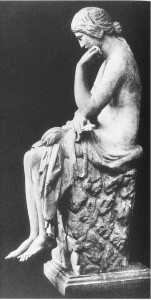 Danaus was enraged by his daughter’s betrayal and imprisoned Hypermnestra—and this is where the story starts to fragment.  In some version Lynceus kills Danaus to free her and avenge his brothers.  In other versions, Danaus agrees to free Hypermnestra, and gives her to Lynceus (a bit less dramatic).  Either way, I am fascinated by this story—what was it about Hypermnestra that she couldn’t go through with it?  Or, maybe, what was it about Lynceus?  Answering that question would make for a great novel.  As would the fate of the other 49 sisters who aren’t whisked directly to Tartarus, but rather offered again in marriage. Their father, recognizing that potential suitors might not exactly be lining up, holds a foot race and unloads his tainted daughters as prizes. 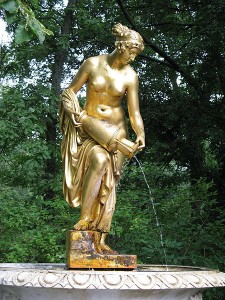 A Danaid with her urn. Photo by Yair Haklai

The story’s overall message is clear: don’t murder your husband.  But more interesting to me is the way it dramatizes the conflict that many women must have felt between allegiance to their family and allegiance to their husbands.  How do you balance the demands of being a daughter and being a wife?  Where should your greatest loyalty lie, and how far should you go to honor it?  In the ancient world, this question would have had frighteningly high stakes: disobeying your father wasn’t just bad—it could be a killing offense, since the patriarch’s word was law.  Once a woman married, that power was supposed to transfer to her husband.  Yet the Danaids had been married against their will, and for less than a day.  Shouldn’t their father’s interests still prevail?  Forty-nine of the Danaids thought so.  Or perhaps that doesn’t give them enough credit for independent thought—perhaps they were cleverly striking a blow for their own power.  With Aegyptus’ sons gone, Danaus and his daughters would inherit the Egyptian throne uncontested.

Either way, it seems monstrously unfair that Danaus escaped the whole affair Tartarus-free.  No filling leaky tubs for him, even though the plan and weapons were his idea.  Unfair too, when we compare the Danaids’ crime with Tantalus and Sisyphus and Ixion: if you’re a man, you have to flout the gods to get condemned; if you’re a woman, killing your husband will do it.

In closing, I have to include the link to these amazing ancient punishment games, where you can try your hand at the Danaids’ task for yourself.  I hope that your week turns out to be better than theirs!