In my last post, I talked about Vergil’s Pyrrhus as the epitome of the very worst of human behavior.  Happily, Sophocles’ Pyrrhus is the opposite: a celebration of our most conscientious, best selves.

The play in which he co-stars, Philoctetes, is cleverly set before Troy falls, before the death of Priam. This allows Sophocles to avoid the entire second half of Pyrrhus’ life—almost as if he is offering a “reboot” of the young man’s story, an alternate line of destiny. Certainly, by the play’s end, it is difficult to imagine Pyrrhus killing Priam as he does in the Aeneid.

The play begins with a prophecy that Troy won’t fall unless Heracles’ bow fights on the Greek side. Unfortunately, Heracles’ bow is with Philoctetes, whom Odysseus had abandoned on an island with a festering wound ten years earlier. Odysseus must go get the old soldier and persuade him to put aside his resentment and aid the Greek cause. He cleverly decides to bring Pyrrhus with him: as Pyrrhus was the only man who didn’t come with them to Troy originally, he is also the only man not implicated in Philoctetes’ abandonment—so Philoctetes may be persuaded to listen to him. 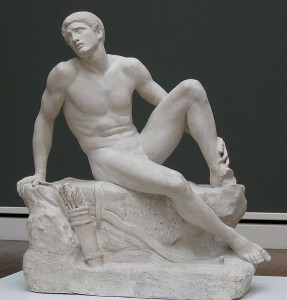 The wounded hero Philoctetes, with his bow and quiver of poisoned arrows from Heracles. Photo by Rufus46

Odysseus tells Pyrrhus that he is to pretend that he hates the Greeks, in order to gain Philoctetes’ trust. If the old soldier will not co-operate, Pyrrhus is supposed to wait until he falls into a festering-wound fit, and then either steal the bow and arrows, or carry him off to the boat while unconscious.

Given what we know of Pyrrhus from Vergil, we would assume that he happily agreed, pausing only to club Philoctetes with somebody’s child first. But Sophocles’ Pyrrhus is a different man. He is appalled by Odysseus’ treachery, and reproaches him for using deceit.  Such tricks, he says, are not in his nature, just as they were not in his father’s. He refers here to Achilles’ reputation for honesty, demonstrated by his famous line in the Iliad that he “hates like death the man who says one thing, and hides another in his heart.”  Such a man, of course, is Odysseus. He and Achilles are perfect foils—youthful honesty-to-a-fault balanced against practiced, shades-of-grey pragmatism. Sophocles here has Pyrrhus take his father’s place as Odysseus’ opposite.

Yet, because he is young, and impressionable—and because Odysseus is a master at persuasion—Pyrrhus reluctantly agrees to the plan. This is the genius, I think, of Sophocles’ characterization: Pyrrhus is a young man looking to find his way in the world, without a father’s guidance. Although his instinct is to spurn Odysseus’ methods, he has no other model to adopt, besides a vague rumor about his father’s values—a father he has never met. Maybe Odysseus is right, after all. I think it perfectly captures those first, unsure steps into adult identity. 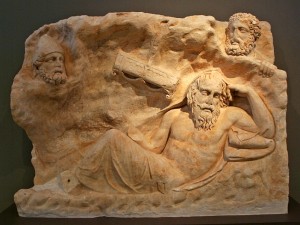 The embassy to persuade Philoctetes. To the left is Odysseus, and the right is Diomedes (who, in some versions, accompanies Odysseus in Pyrrhus' place)

But Pyrrhus is in luck, because for a young man looking for a role model, it is hard to do better than Philoctetes. The two meet, and Pyrrhus finds himself instantly drawn to the older man’s plight, character and dignity. When the moment comes to defraud Philoctetes, Pyrrhus hesitates, torn between his duty to the Greeks and his own instincts. Movingly, he exclaims, “I wish I were back in Scyros!” He feels tainted by the moral compromises of the adult world, and longs to return to the simplicity of childhood. Yet, he cannot return, and is pressed hard on both sides by Odysseus and Philoctetes.

Sophocles stacks the deck against Odysseus a bit here—for although we see Pyrrhus’ dilemma, the right choice seems obvious—if he is to keep his soul, he must help Philoctetes, and reject Odysseus. But playing devil’s advocate, let’s examine Odysseus’ motive, which is, always, to serve the army’s greater good, and to get himself home again safely. If Pyrrhus forces Philoctetes to come to Troy, Philoctetes will be miserable—but an entire army’s worth of soldiers will be able to return home again. In the Iliad, we see the dire consequences of Achilles setting the personal over public good—what does it mean to save a single person at the expense of an entire nation?

Sophocles, however, doesn’t make Pyrrhus suffer the consequences of his choice: as soon as he has agreed to help Philoctetes, the god Heracles appears to pacify his old companion, and order him to Troy. It is almost as if the entire episode were an elaborate test, a moral gymnasium designed to help an young man practice his path. 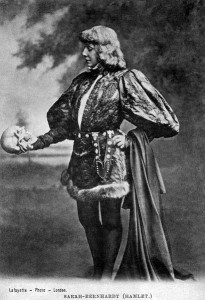 Pyrrhus—both Pyrrhuses—had an interesting afterlife, including a notable cameo in Shakespeare’s Hamlet. When the players arrive, Hamlet recites a speech about Pyrrhus’ killing of Priam, where Pyrrhus stands over Priam with his sword raised and, for a moment, “does nothing.” Here Pyrrhus becomes a stand-in not only for Claudius—killer of the old King—but for Hamlet himself, stuck in his own inaction.

For a more recent portrait of Pyrrhus, I would recommend Mark Merlis’ audacious novel, An Arrow’s Flight, which tells the story of Pyrrhus’ struggle to separate himself from the reputation of his bloody and distant father. I admire this novel not just for its storytelling, but its flat-out daring: Merlis takes the story of Pyrrhus (drawn mostly from Sophocles’ play), and puts it straight into the modern world, while still retaining all the ancient Greek structures, the gods included.

And, by the way, Pyrrhus also makes an appearance in The Song of Achilles. My take on him is decidedly Vergilian.

Thanks so much to myth-lover Susanne for the terrific suggestion!  Next week: Ancient Greek romance, just in time for Valentine’s Day….