Myth of the Week: Pyrrhus, Part I

It is one of the oldest stories: a famous and powerful man has a son.  The son grows up.  How will he interact with his father’s reputation?  How will he define himself as his own man?  It was an even more fraught question in ancient Greece, where no matter how famous a man became, he was called not by his own name, but by his patronymic (his father’s name plus an ending that meant “son of”).  So, even though Achilles’ fame far surpassed his father’s, he was still referred to as “Pelides” (son of Peleus).  Comparison was inescapable, stitched into one’s identity.

In the stories of the Trojan War, there is a trinity of sons who grow up in the shadow of intimidating paternal legacies: Telemachus, son of Odysseus; Orestes, son of Agamemnon; and Neoptolemus, son of Achilles.  All of their stories are worth telling, but I thought I’d start with Neoptolemus (also called Pyrrhus). 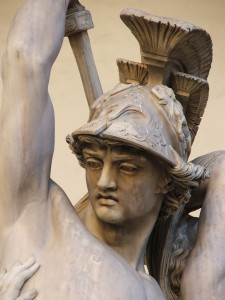 One of the strangest things about Neoptolemus is the fact that there seem, in the myths, to be two of him: two mutually exclusive versions of his story, each championed by a master poet, Vergil and Sophocles.  In one, Neoptolemus is a sadistic perversion of his father’s legacy, heir to his strength and capacity for violence, but not his humanity; in the other, he is a heroic young man, struggling to do the right thing.  Generally, Vergil’s portrait, from book II of the Aeneid, has proved the more lasting, so that is where I will start.

Achilles’ sea-nymph mother, Thetis, desperate to keep her son from an early death at Troy, dressed him as a woman and hid him on the island of Scyros, in the court of King Lycomedes.  But Lycomedes’ daughter, Deidameia, discovered the fraud, and she and Achilles conceived a child—Neoptolemus.  Shortly thereafter, Achilles was found out, and sailed for Troy, leaving his wife and unborn child behind, for good. 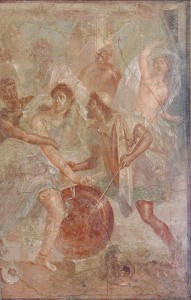 Achilles being discovered in a dress on Scyros, as he seizes a shield. From a fresco at Pompeii

Neoptolemus grew up with a head of red-gold hair, and so earned the nickname Pyrrhus (fiery, the same root as the word pyre).  Of his childhood, we know little other than that he was raised on Scyros by his mother and grandfather, with help from Thetis.  Like his father, he was named in a prophecy: Troy would never fall unless Pyrrhus came to fight for the Greeks.  When his father was killed in the tenth year of the Trojan War, Pyrrhus sailed for Troy.  If the timing seems off to you, it is—even if we give Achilles a few years to get to Troy, Pyrrhus should still only be around twelve, absolute maximum.

All I can say is: that is one creepy twelve-year-old.  When he gets to Troy, Pyrrhus takes his father’s place as one of the most terrifying and reckless warriors of the Greeks.  He is among those in the Trojan Horse, and according to the Odyssey, the only one who isn’t afraid of being caught.  Once inside the city of Troy, he uses an ax—Shining style—to tear his way into Priam’s palace, leaving a bloody trail behind him. 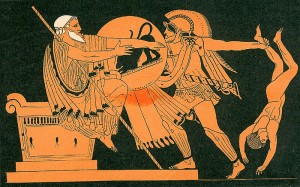 One of the things that I love about Vergil as an author is his profound humanism.  Even his so-called villains are worthy of sympathy and understanding—all, that is, except for Pyrrhus.  With Pyrrhus, Vergil seems to be doing something else entirely: creating a person with no ability to pity or empathize with others. It is, as far as I can tell, the first depiction of a sociopath in Western literature.

Once inside the palace, Pyrrhus chases down the Trojan prince Polites, killing him in front of his father, the aged King Priam, who has taken shelter at the household alters.  The old king, in one of the most moving moments in the Aeneid, rises, trembling with grief and age, to deliver a ringing speech that calls down the wrath of the gods upon Pyrrhus for his double blasphemy: killing a son in front of his father, and defiling a sanctuary.  As a further reproach, he compares him to his father, unfavorably: “Not even Achilles behaved so to me.  He knew how to respect the laws of the suppliant; he returned my son’s body to me, and sent me safely home again.”  This is a reference to the famous scene in the Iliad where Priam goes to Achilles’ tent to beg for Hector’s body, and Achilles relents–a shining moment of mercy and hope in an otherwise bloody work. 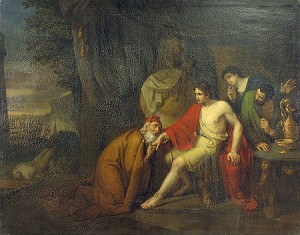 But you cannot shame a man like Pyrrhus.  His response is sneering contempt:  “You can go tell my father about my disgraceful deeds yourself. Now, die!”

He seizes the old man by his hair, and drags him, slipping in the blood of his son, to the altar to dispatch him.  Later we hear that Priam’s body has been left on the shore, missing its head, for the animals to eat.  It is not enough for Pyrrhus to have killed him, he must also dishonor him—mutilating his body and depriving his soul of its eternal peace.  The hope kindled in the meeting between Achilles and Priam is snuffed, utterly, by the son. 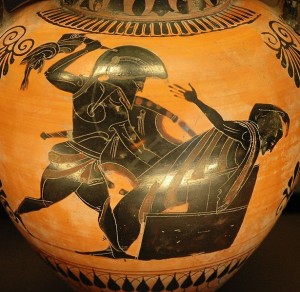 Pyrrhus killing Priam on the altars, with Hector's baby son, Astyanax, as a club.

Sadly, that is only the beginning.  After killing Priam, Pyrrhus goes in search of Andromache, Hector’s wife.  When he finds her, he seizes from her arms her infant son, Astyanax, and smashes his brains out against the wall.  (In fact, in some lurid versions of the story, he uses the baby’s body to club the grandfather Priam before killing him.) Andromache herself he takes captive, as his slave-wife.  It is a horrifying cruelty: forcing her to share the bed of the man who murdered her son, and whose father murdered her husband.  Then, before returning to Greece, Pyrrhus sacrifices the princess Polyxena on his father’s tomb.

Perhaps it will be no surprise to hear that such a violent man comes to a violent end.  Pyrrhus, upon returning to Greece, decides that no bride is worthy of him except for the daughter of Helen herself, Hermione—even though she is already betrothed to Orestes.  Rather than wooing her, or trying to negotiate with her father, Pyrrhus presses forward with his usual method: force.  He abducts the girl, and rapes her. 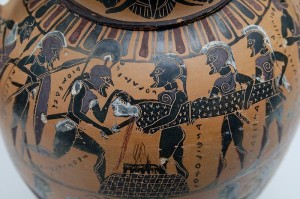 One of the things that is most disturbing about Pyrrhus’ story is that his victims are not, as his father’s were, fellow warriors.  There is no Memnon here, no Hector, no Penthesilea.  Instead we have people who are powerless: infants, the elderly, women not trained in combat.  Vergil’s point isn’t, I think, that Pyrrhus is a coward–we see his fearlessness and ferocity in the sack of Troy– but that he’s unnatural.  The things which would normally arouse pity in us mean nothing to him.   This makes him a very different kind of villain from someone like Agamemnon, whose faults we recognize: selfishness, cowardice, pride, petty brutality.   To me, Pyrrhus is a far more  frightening figure, a man who is moved by no boundaries or bonds of affection, who acknowledges no limitation on his behavior.  The world is made up only of his own strength and everyone else’s weakness.

So who, then, finally stops this unstoppable force?  In some versions of the story it takes the god Apollo himself.  But in Vergil’s version, it’s Orestes, Agamemnon’s son, enraged at the violence done to his fiance.  Pyrrhus has finally crossed the wrong person, and Orestes cuts him down.  A satisfying end, and an interesting one too: Agamemnon and Achilles’ feud has repeated itself in the next generation–only this time, at least for me–with the sympathies reversed.

By the way, at Pyrrhus’ death Andromache is freed and, with her brother-in-law Helenus, able to found a new city in Troy’s image, and live out her life in peace.

Coming on Wednesday: Pyrrhus, part II, the son Achilles would have been proud of.