Myth of the Week: Psyche and Eros

Maybe it’s just the dark and cold of February getting to me, but it seems like a good time of the year for love stories.  This one comes at the suggestion of the lovely Kayleigh and Sam: the story of Psyche and Eros.

Eros and Psyche has proved one of most enduring and beloved Greek myths.  Partially, I think its popularity stems from the combination of its specific, romantic story, and its allegorical implications— the two main characters have names that literally mean “Soul” and “Desire.” So you can see why those interested in myth and psychology, like Carl Jung, loved it.

Eros and Psyche, by a favorite painter of mine, William-Adolphe Bouguereau

For me the story has always felt more fairy-tale than Greek myth. There are jealous sisters, quests of penance, helpful animals, and a supposedly-hideous monster who turns out to be a handsome god.  And, as I noted last week, it is one of the few love stories in mythology with a happy ending.  The first extant version of it is by a Roman author, Apuleius, but I’m going to use the Greek names throughout (Eros, rather than Cupid, and Aphrodite, rather than Venus).

The story begins with Psyche, a girl so surpassingly beautiful that the neighbors mistake her for Aphrodite and begin to worship her.  This only makes Psyche miserable.  Not only is she worried that Aphrodite will be angry with her, she’s desperately lonely—her beauty is so intimidating, no one will speak to her.  She envies her plainer sisters, who each have husbands and families already. 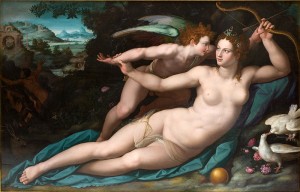 Aphrodite, goddess of love, and her winged son Eros

This doesn’t, of course, stop Aphrodite from being enraged when she hears that her rightful worship is being diverted to a mere mortal.  She orders her son, Eros, to go and punish the girl by—a touch of Midsummer Night’s Dream—making her fall in love with the most hideous creature imaginable. One of the creepiest details of the story is that, after asking him this, Aphrodite kisses her son “with open mouth for a long time.”  I guess this is what it’s like if your mother is the goddess of love?

Meanwhile, back on earth, Psyche’s father has consulted Apollo’s oracle about what he should do with his beautiful, but apparently unmarriagable daughter.  The oracle tells him that Psyche is destined to marry a hideous, flying snake-creature, and the only way to appease the angry gods is to tie her to a mountain crag and let the creature carry her off. The father obeys, dressing his daughter in bridal finery, and sending her to the mountain. 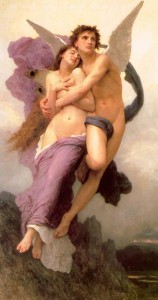 Eros and an enraptured Psyche

Up on the rock, it turns out that there isn’t a snake-creature after all, only the (invisible) god Eros, waiting to avenge his mother.  But instead of punishing Psyche, he falls madly in love with her.  He tells the west wind, Zephyr, to waft her to his palace—a beautiful place of gold, marble and jewels, filled with luxuries and helpful invisible servants.  Definitely some strains of this filtered into the story of Beauty and the Beast.  The servants feed and bathe the girl, then lead her to her bedroom and let her know that their master, her new husband, will come to visit her that evening.  Which, if this were a realistic story, would be a frightening announcement. 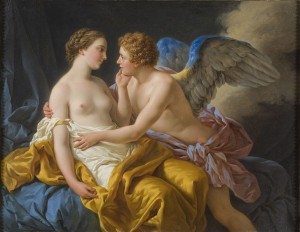 Cupid and Psyche as husband and wife

But this is a fairy-tale, and we know that the husband is Eros, and that Psyche will of course fall in love with him–he is the god of desire, after all.  The two consummate their love that night, though in total darkness because Eros has forbidden her to look at him.   An interesting moment that could be taken a lot of different ways, the most appealing of which is that love is about trust: having faith in your feelings for the other person, rather than obsessing about appearances.  But (maybe it’s the cynic in me) I can’t ever completely ignore the other interpretation—that Psyche, as a woman, is supposed to blindly trust her husband, and obey him without question.

Eros, with sleeping Psyche. I find this painting hilarious. The adolescent expression on Eros' face is amazing.

And so it goes.  Psyche spends her nights with her beloved but unseen husband, and her days alone (except for the invisible servants).  After a time, she asks her husband if she may invite her sisters for a visit.  He warns her to be careful of them, but innocent, trusting Psyche doesn’t believe him.  Already envious of their sister’s greater beauty, the two are enraged by her further good fortune.  They decide to try to destroy her relationship with her new husband, by implying that he’s a hideous monster. They convince her that she must get a look at him, so she can know for sure. 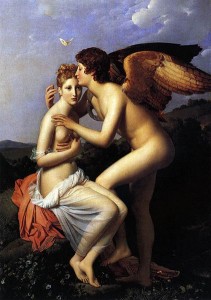 Of course, on some level, Psyche does already know—after all, she’s been sleeping with him at night and it’s difficult to mistake a handsome human body for a hideous snake creature when everybody’s naked.  But the moment still resonates.  It speaks to a universal human experience—struggling to trust our own understanding, in the face of familial or societal pressure.  It is always harder to do than we think it will be.  If I had been Psyche, I probably would have looked.

That night, Psyche waits until her husband has fallen asleep, and lights the oil lamp.  She finds not a hideous monster, but a divinely beautiful young man.  She is so entranced that she doesn’t notice the hot oil begin to spill from the lamp.  It falls on Eros, waking him.  He leaps from the bed, tells her that she has ruined everything, and flies away.  Without faith there can be no love.

Psyche, lifting the lamp to see her lover, and waking him with the spill of hot oil

Poor Psyche wanders from place to place, searching in vain for her husband.  Her sisters are delighted by her misfortune, and both rush to the crag where Psyche had been carried off. They leap from it, expecting to be wafted to the god’s bedchamber to take her place.  Instead, they smash on the stones below.  Of all the ends of evil sisters in fairy-tales, that’s definitely one of the more decisive.

Psyche decides to pray to Aphrodite, hoping that she will intervene with her son.  But Aphrodite is still angry about the girl’s beauty, and jealous of her son’s love for her.  She says that she will help the girl, as long as Psyche performs several tasks as penance.  Here is where the fairy-tale really takes hold: the first task is to sort a huge pile of mixed grain over night, an impossible task for one girl.  But not for some valiant, friendly ants!  They sort the entire pile for her. 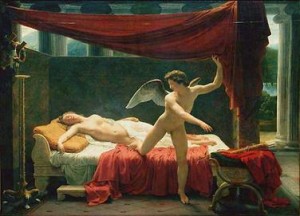 Aphrodite is angry and tells Psyche that she will next have to collect the fleeces from a special flock of vicious sheep (I’ll take your word for it, Apuleius.  But I do think that another animal would have been more convincing.).  Bravely, Psyche sets off to do so, but is stopped by a helpful reed (yes, a reed) who whispers to her that the sheep are too dangerous to be approached, but if she waits a little, she can collect the fleece that they leave behind on bushes. She does so, and once again, Aphrodite is angry.

The quests continue, culminating in Aphrodite sending Psyche down to the underworld to fetch some of Persephone’s beauty.  Psyche, in despair, knows that she cannot succeed, and goes to a high tower to throw herself off—but the tower prevents her, and gives her valuable advice about how to slip into the underworld past Cerberus (feed him a seed-cake), and then slip out again.  Most importantly, the tower warns, she is not to look in the box of “beauty” under any circumstances. 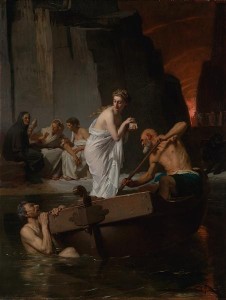 Psyche traveling through the underworld

I think we can see where this is going.  Psyche, wanting her husband to love her again, does indeed look in the box of beauty, hoping to take a little for herself.  But instead of beauty, what she finds is deathly sleep—and she falls, unconscious, to the ground. 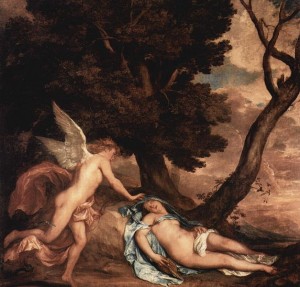 Eros rushing to the aid of his fallen Psyche

At last, Eros takes pity on his poor Psyche.  He appeals to Zeus, who uses his power to wake her from her sleep, and to make her immortal.  She and Eros are reunited, and even Aphrodite is reconciled to her new daughter-in-law, acknowledging that while Psyche is imperfect, her dedication to her husband cannot be doubted, since she was willing to go into death itself to win him back. The two live happily every after, and have a daughter, whose name is Hedone (pleasure).

As you can see from above, the story made a wildly popular subject for artists.  C. S. Lewis also wrote a fascinating version of this story from the point of view of one of the evil sisters.  It has the great title Till We Have Faces.

Finally, the loveliest bit of linguistic trivia I know: in Greek, the word for soul—psyche—also means butterfly.