Myth of the Week: Philoctetes

Today’s myth of the week is one of my very favorites, though I didn’t discover it until college.  When I graduated from high school, my Latin teacher had given me a book of Sophocles’ tragedies as a gift, and I was steadily working my way through it. Somewhere in the middle, I came to one called “Philoctetes.”  Who?

This was before the days of Google, so I got out my trusty Oxford Classical Dictionary and learned that Philoctetes had been a close companion of Heracles.  Maybe the closest: when Heracles was dying in agony, he begged his friends to put him out of his misery; Philoctetes was the only one who had the guts to do it.  In gratitude, Heracles bequeathed Philoctetes his famous bow, with its arrows dipped in the poison blood of the hydra. 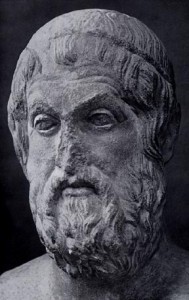 Bust of the playwright Sophocles

But that was just the beginning of Philoctetes’ story.  Years later, he joined the other heroes of Greece in pursuing Helen of Sparta’s hand in marriage.  By then he was renowned for his connection to Heracles, and also for his deadly archery.  And though usually in the ancient stories a bow and arrows are considered the weapons of a coward (as with Paris), you never hear a single word against Philoctetes.  Heracles’ bow would have been enormous, and only a true hero could have strung and drawn it.

As a suitor of Helen, Philoctetes must have seemed out of place among the other men.  He was a generation, or more, above them, and I imagine him as weathered, dignified, and still full of stoic grief for the loss of his famous friend.   It was unlikely that such a man would tempt Helen, and of course he did not.  But he did, along with all the other suitors, swear to uphold her marriage to Menelaus. 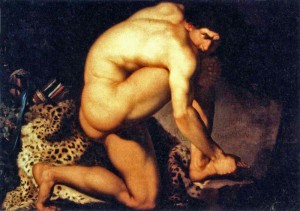 Which is how, some years later, he found himself summoned to Troy to get her back.  Despite his age, Philoctetes upheld his oath and, paired with Odysseus as a sailing partner, the two men and their fleets began making their way to Troy.  Like all Homeric journeys, there were frequent stops on islands along the way, and on one such island, Lemnos, Philoctetes was bitten by a terrible viper.  He didn’t die, but the wound festered agonizingly, stinking and causing Philoctetes to fall into seizures.  Odysseus, practical as ever, didn’t want a smelly, hideous, screaming man on the ship, so he persuaded the other men to abandon Philoctetes while he slept.

When people ask me why I don’t see Odysseus as a straight-up hero, this myth is one of my answers.  Odysseus’ pragmatism here seems indistinguishable from ruthlessness: he abandons an aging hero, in excruciating pain, on a deserted island without any supplies of food or water.  When Philoctetes wakes, there is only empty beach and his bow.  Ten years of lonely, crushing pain follow.   In describing these years, Sophocles is at his most moving.  As in Oedipus at Colonus, and Ajax, Sophocles once again shows himself the champion of those who have been cast out from society, who feel themselves betrayed and abandoned.  Philoctetes’ bitter monologues are absolutely piercing in their indictment of a society that would throw away its elders because they have become inconvenient.  No matter how many times I read them, I always find myself caught up anew. 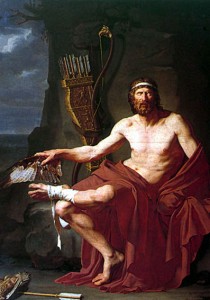 Philoctetes, with his wounded foot. Heracles' bow and arrows in the background. He has been hunting birds to feed himself.

Fast forward ten years, after Achilles has died but before Troy has fallen.  The Greeks learn from a prophecy that they will never take the city of Troy unless the bow of Heracles fights on their behalf.  In Sophocles’ play, the Greek leaders dispatch Odysseus and Neoptolemus, Achilles’ young son, to go get Philoctetes (in other versions, Odysseus’ partner is the tricksy Diomedes).  Odysseus’ plan is to send Neoptolemus in as mediator because Philoctetes doesn’t know Neoptolemus, and is less likely to shoot him on sight.  Neoptolemus is supposed to engage the old man in conversation, wait for him to fall into a fit, then steal his bow and arrows. After all, reasons Odysseus, the prophecy never said that it needed the hero, only his weapons.

But Neoptolemus finds himself drawn to the old man’s dignity, and moved by his suffering.  When Philoctetes falls into a fit, he does not take the bow, only holds it until Philoctetes recovers, then returns it, chastising Odysseus: “It is far better to be just than wise.”   Still enraged by their betrayal, Philoctetes refuses to help the Greeks.   Just when all seems lost, the god Heracles appears, urging his old friend to relent, and promising Philoctetes that if he goes to Troy he’ll find a healer—Machaon, son of Asclepius—who can end his agony.  Philoctetes, obedient to his friend, agrees. Once at Troy, Philoctetes helps to take the city and, most importantly, kills the prince Paris—one archer slaying another.  He survives the war and returns safely home. 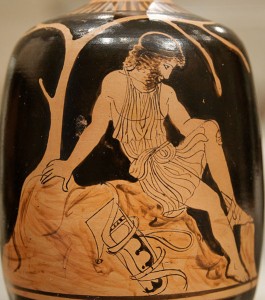 Vase Painting of Philoctetes, with his wound, bow and arrows. Fletcher Fund, 1956, The Metropolitan Museum of Art

What makes this such an interesting tragedy is that, in the end, it isn’t one.  Thanks to Neoptolemus, Philoctetes is welcomed back into society.  The middle-aged Odysseus is inveterate, set in his ruthless ways, but there is still hope to be found in the innocent and clear-eyed gaze of youth.  It also offers hope in the form of forgiveness. Philoctetes could indeed make the Greeks suffer as he has suffered; but in the end, he does not.  I love his story so much that I found myself constantly having to battle the temptation to include it in my novel.  There are several Philoctetes scenes that got left on the cutting room floor simply because they didn’t fit, but one cameo remains.

I am not the only person who has been moved by Philoctetes’ story over the years.  He is the subject of a Wordsworth sonnet, and Sophocles’ play forms the core of  the amazing “Philoctetes Project,” which brings this play and others to army veterans.  At the other end of the spectrum is Disney’s “Hercules” which features–sort of–Philoctetes as a character.  The satyr voiced by Danny Devito was inspired, I can only guess, by some unholy combination of Philoctetes and Chiron, plus some goat thrown in.  He calls himself “Phil.”

The Myth of the Week is going to take a vacation next week, but will return in the New Year.  I wish you all very happy, myth-making holidays!