Myth of the Week: Penthesilea

My students often tease me that every mythological character is “one of my favorites.”  But, really, this week’s character is: Penthesilea, Queen of the Amazons.

The Amazons were a legendary race of warrior women who lived somewhere in the region of the Black Sea (sources differ as to exactly where).  There were a number of popular stories about them—that they were daughters of Ares, that no men were allowed in their camp.  But the most famous of all is the one about their chest: that, in order to be able to wield a bow better, they would cut off one of one of their breasts.  The story gained traction from some ancient etymologists, who claimed that the word Amazon derived from “a” (without) and “mazon” (breast, the same root as the “maste” in mastectomy). 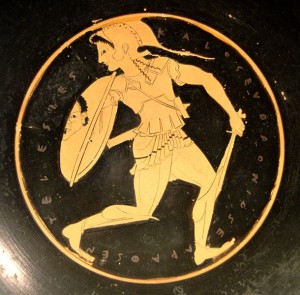 As I child, I remember goggling at the breast story with horrified admiration.  Those Amazons sure were committed to their archery!  Now, of course, it seems absurd.  As Olympic-level female archers the world over can testify, breasts do not interfere with shooting a bow.  Surely the Greeks would have known that?  But perhaps not—perhaps there simply weren’t enough female archers in the ancient world to disprove it.  And part of me can’t help but wonder if the story wasn’t on some level meant to discourage women from taking it up—sorry, you’ll have to cut off your breast first.

The Amazons had a number of famous Queens, but Penthesilea is perhaps the most storied. She was a daughter of the war-god Ares, and Pliny credits her with the invention of the battle-ax.  She was also sister to Hippolyta, who married the hero Theseus, after being defeated by him in battle.  Penthesilea ruled the Amazons during the years of the Trojan war—and for most of that time stayed away from the conflict.  However, after Achilles killed Hector, Penthesilea decided it was time for her Amazons to intervene, and the group rode to the rescue of the Trojans—who were, after all, fellow Anatolians.  Fearless, she blazed through the Greek ranks, laying waste to their soldiers.  I love Vergil’s glorious description of her in battle:

“The ferocious Penthesilea, gold belt fastened beneath her exposed breast, leads her battle-lines of Amazons with their crescent light-shields…a warrioress, a maiden who dares to fight with men.”

(By the way, the word that Vergil uses for warrioress is bellatrix, the inspiration for Bellatrix Lestrange’s name in Harry Potter.) 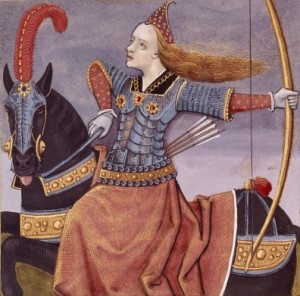 A Renaissance representation of Penthesilea

I can still remember the moment in my high school Latin class when I first translated those lines.  I had heard of Penthesilea and the Amazons before, but this was the first time I really understand just how impressive and unusual it was in the ancient world to be a woman who “fights with men.”  The heroines of Greek mythology tend towards thoughtfulness, fidelity and modesty (Andromache, Penelope), while the daring and headstrong personalities generally go to the antagonists–Medea, Clytemnestra, Hera.  But Penthesilea is something else entirely: a woman who meets men on her own terms, as their equal.  Perhaps in honor of this, Vergil doesn’t give her the standard heroine epithet of “beautiful.”  For him, it is her majesty and obvious power that make her notable, not her looks.

Sadly, Penthesilea’s story ends in tragedy, at the hands of none other than Achilles himself.   The most popular version of it is quite strange–that Achilles falls in love with her as he stabs her, catching her tenderly, even as she collapses to the ground.  I have never been sure how to take this–is it a compliment to her spirit?  Or is it an indignity–Achilles turning the warrior back into a woman?  It all depends upon the telling, of course.  But I like to think that maybe Achilles sees in her a sort of kindred spirit–another fierce and flashing youth, proud and driven towards honor.  But he is so absorbed in his own drama that he realizes it, alas, a moment too late. 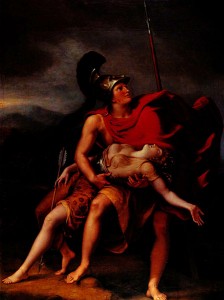 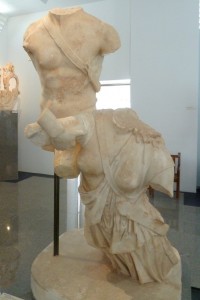 A broken statue of Achilles catching Penthesilea. I took this picture myself at the Aphrodisias museum, in Turkey.

Contrary to popular belief, Penthesilea’s story isn’t actually told in the Iliad (which ends with Hector’s funeral, before the Amazons arrive), but in a lost ancient epic called  Aethiopis.  This poem continued the story of Achilles’ great deeds, which included the killing of several famous warriors—Memnon, King of Aethiopia, and Penthesilea most prominent among them.

It is unsurprising that such a vivid character had a long legacy in art and literature–first and foremost as the inspiration for Vergil’s great female warrior, Camilla, in the Aeneid.   Penthesilea’s name became synonymous with female strength; when Eleanor of Aquitaine accompanied her husband on the second crusade, she is rumored to have attired herself as the famous Amazon.  As far as I can find, there aren’t any novels focused on Penthesilea’s story, but she does appear in several poems (including one by Robert Graves, author of I, Claudius and Hercules My Shipmate).  If any one knows a story centered on her, drop me a line! 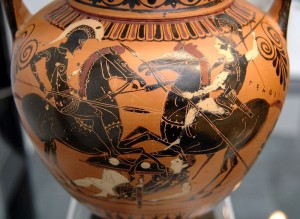 Achilles and Penthesilea ride into combat with each other.

A final story about Amazons.  When I was in college, I volunteered to teach mythology to fifth graders.  One day, I told the students a number of myths, the Amazons included, and then had them pick one story and draw a picture of it.  Going around the room, I saw lots of Pegasuses, Heracleses, and Minotaurs.  So I was excited when I noticed that one boy had drawn a very buff looking Amazon, wielding a bow.  At her feet was a round object.
“What’s that?” I asked.
“That’s the breast she just cut off,” he answered.
“Oh!” I think I said.  “Very vivid!”

On that note, have a wonderful, and mythological, week!