Myth of the Week: Nisus and Euryalus

As those of you who are regular readers know, I love the Aeneid.  Encountering Vergil’s great epic poem in high school was an absolute revelation to me—and it has never stopped being a revelation, no matter how many times I read it.  With Vergil, there is always a greater depth, another subtlety, a further shining moment of poetry. 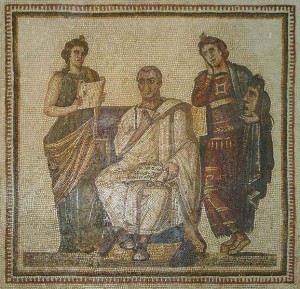 Mosaic of the poet Vergil, flanked by the muses of tragedy and history

Within the Aeneid, one of the saddest episodes (and one of my favorites) is the story of the lovers Nisus and Euryalus. Both are Trojans, refugees from their burned and fallen city, who are following the Trojan noble Aeneas to a new home.  Euryalus is described as surpassingly beautiful, and also very young—still in the time of “green youth,” beardless, and tenderly connected to his mother.  Nisus is a bit older, but still young himself, and deeply in love with Euryalus.  When we meet them, it is in a rare moment of leisure: they have both signed up as contestants in a footrace.

Initially, Nisus flashes ahead of the other runners, but then disaster strikes: he slips on the grass, blood-soaked from the sacrifice, and tumbles to the ground.  Salius, the Trojan in second place, surges into the lead; Euryalus is close behind.  But Nisus knows how much it would mean to his beloved to triumph.  He trips Salius, and Euryalus finishes first.  Understandably, Salius complains about Nisus’ cheating, and the good Aeneas ends up awarding all three of them prizes.  It’s a slight scene—sweet and almost comic.  But given what comes later, it also carries strains of darkness.  We see already how deep Nisus and Euryalus’ bond runs—and we see that Nisus will do anything for his lover. 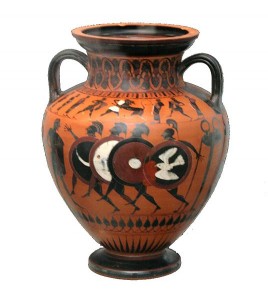 When we see them next in book IX, games have been replaced by bloody war. The Trojans have arrived in Italy, only to find themselves opposed by a native Latin force.  Aeneas has gone off to look for allies, leaving the Trojan forces besieged by the Latins.  Nisus bravely proposes a night raid, which Euryalus insists on joining.  Vergil again emphasizes the depth of feeling they have for each other, the “single love between them.”  Nisus tries to convince Euryalus to stay behind, fearing for his safety, but Euryalus won’t let his beloved go alone.

The scene that follows is a brutal one: the two young men venture into the sleeping camp, and begin killing all the men they can find.  It’s a strange mix—as if Achilles and Patroclus had been possessed by the spirits of Odysseus and Diomedes.  Nisus is like “a hungry lion” as he tears through the sheep-like, helpless Latins;  Euryalus is no less vicious.  Vergil, always sensitive to the cost of war, lingers a moment over the victims, who are themselves beautiful young men with their own stories, and their own families who will mourn them. 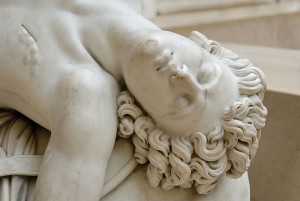 As dawn creeps near, Nisus urges Euryalus to leave off slaughter and make their escape.  Euryalus agrees, stopping to gather a few pieces of armor as his spoils, including a beautiful helmet.  But as they flee the camp, the polished metal of the helm catches the moonlight, alerting a group of Latin horsemen, who immediately give chase.  Nisus and Euryalus plunge through the woods.  Nisus, who grew up in the mountains, escapes; Euryalus does not.  When Nisus realizes he has lost his friend he immediately races back, only to see Euryalus being taken captive.  Hurling his javelin, he kills one guard, then another.  The Latins, enraged, prepare to stab Euryalus.

It is a terrifying moment.  Vergil keeps us with the desperate Nisus, who bursts from the woods screaming that they should attack him instead, that Euryalus is blameless.  But it is too late.  The Latins stab Euryalus, whose slumps forward like “a blood-red flower, cut by a plow.” Nisus flings himself among them, desperate to kill the man who killed his lover, before he himself is slain.  With his last breath, he falls upon his beloved’s body.

Nisus, over the fallen Euryalus. Photo by Marie-Lan Nguyen

Vergil does not stop the story there.  The angry Latins take their revenge, cutting off the heads of the young men, and sticking them on spikes. For all their bravery and tragic love, we can’t help but see that Nisus and Euryalus’ night-raid has single-handedly escalated the war’s brutalities.  Vergil also does not forget Euryalus’ mother, whose grief-stricken lament for her lost son is perhaps the most heart-breaking of all.

One of the things I love most about Vergil is his profound sympathy for human nature.  Nisus and Euryalus aren’t idealized heroes, but flawed, and very real young men, with maybe more courage than good sense.  Vergil’s great heart mourns for their lost youth and honors their love, even stepping outside the bounds of his narrative to deliver a moving epitaph:

“If my song has any power, no day shall ever remove you from memory.”