Myth of the Week: Hyacinthus

Recently, a friend and I were talking about how the same-sex undertones (or overtones) are often bowdlerized from retellings of Greek myths.  As children, we had both been puzzled by the story of Ganymede, the beautiful youth whom Zeus falls in love with and, in the form of an eagle, abducts to Mount Olympus to be his lover and cupbearer.  In the version I read, there was no mention of Zeus’ desire, and I remember feeling confused as to how Zeus knew he was such an excellent cupbearer just by looking at him, and why cupbearers were so hard to come by, and furthermore, why did it make Hera so mad?

All this is by way of leading up to today’s story about the youth Hyacinthus and the god Apollo, which was the first myth where I realized that the two men were definitely lovers, not just “close companions.” 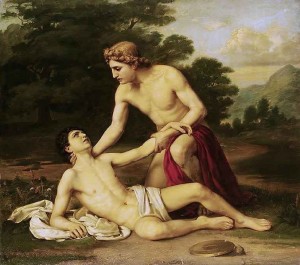 Apollo and the dying Hyacinthus, with the fateful discus on the ground. Alexander Kiselev.

Hyacinthus was a beautiful Spartan youth, beloved by the god Apollo.  As the good Spartan he was, Hyacinthus loved athletics, and one day the two decided to practice throwing the discus.  Apollo went first, sending the disc flying up to “scatter the clouds” as Ovid says.  Hyacinthus ran laughing after it, thinking to catch the disc, but instead it hit him in the head, killing him.  Ovid has a beautiful passage about Apollo holding the dying youth, desperately trying to use his skill with medicine to keep him alive.  But even the mighty god of healing could not save the one he loved.

In honor of his lover, Apollo makes a flower spring up from Hyacinthus’ blood.  Confusingly, this flower isn’t actually what we today call a hyacinth.  Most sources agree that it was most likely an iris or a larkspur, since the myth tells us that Apollo writes on the flower the sound of his grief (Ai, Ai).  The iris, with its yellow markings on the purple leaf, seems the likeliest to me, though theoi.com disagrees, offering this helpful visual aid on behalf of the larkspur.  (On a side note, some say this flower, whichever it was, actually sprang from the dead Ajax’s blood, not Hyacinthus’. In that case, the markings spell out AI, in honor of Aias, Ajax’s Greek name.) 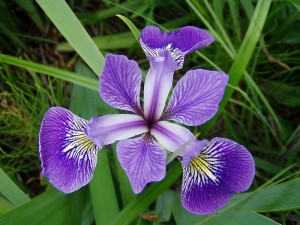 An iris. I know, I don’t see the “AI” either. Photo taken by Danielle Langlois, July 2005, Forillon National Park of Canada, Quebec, Canada

In a second, quite popular variant of the myth, Hyacinthus’ death is actually a murderous crime of passion.  Turns out that not only was Apollo in love with Hyacinthus, but so was Zephyrus, the west wind.  Seeing how attached Apollo and Hyacinthus were, he grew jealous, and in an old-fashioned twist on “If I can’t have him no one can” he deliberately blows the discus into Hyacinthus’ path, killing him.  This version emphasizes the terrifying pettiness of the gods, and the dangers of mixing with them, even if–especially if–they love you.  Like nearly all ancient love affairs between mortals and divinities, it ends in tragedy for the mortal.

Whenever I tell this story, I always wish that there were more of it.  Its final image of Apollo cradling Hyacinthus is beautiful and sad, but we don’t know anything about Hyacinthus and Apollo’s love beyond that moment, how they came to meet, or who Hyacinthus was.  It’s almost more of a triptych then a story, three moments caught in amber: the youth and Apollo happy together, the youth chasing the discus, the lover grieving over his dying beloved.  It’s enough to make me feel sympathy for Apollo, who has never been a particular favorite of mine. 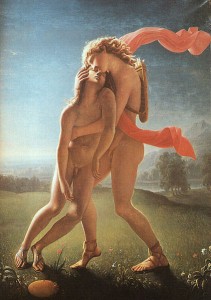 Aside from its tragedy, Hyacinthus’ story also has a historical significance.  The “-nth” suffix in Hyacinthus indicates that the name is actually quite old, a remnant of some sort of pre-Greek language, from before the development of ancient Greek culture as we know it.  Other examples include “Corinth” and the word “labyrinth” (see the Minotaur myth).

Some speculate (the Oxford Classical Dictionary included), that the story of Apollo tragically killing Hyacinthus is actually symbolic.  Given the antiquity of his name, it’s likely that Hyacinthus was some sort of older native nature deity, who was replaced by the Olympian Apollo. The myth preserves this cultural change in story form, having the new god “kill” the old one. 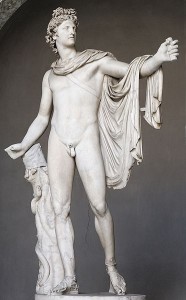 Either way, Hyacinthus became an important religious figure, who was particularly worshipped in Sparta during a three-day festival, called Hyacinthia.  The festival included mourning rites for the youth’s death, then celebration of his rebirth as a flower. In this regard, Hyacinthus seems similar to the god Adonis, and the eastern Attis, all three of whom are youths who die in order to ensure the earth’s fertility—the male versions of Persephone. The festival was important enough to the Spartans that they were said to have broken off a military campaign in order to return home and celebrate it. 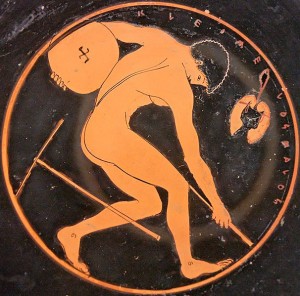 Vase painting of a discus-thrower, with other athletic gear.

A final story about Apollo and Hyacinthus.  Though the myth has had a long life in visual art, it hasn’t been nearly as popular in other types of media.  The only exception I could find was an opera composed by the eleven-year-old Mozart, entitled “Apollo et Hyacinthus.” The libretto for the piece was written by a priest, Rufinus Widl, who apparently found the story too scandalous because he invented a sister for Hyacinthus, Melia, to replace Hyacinthus as Apollo’s love interest.  In this version, the youth’s death is more tragic to the family than Apollo, affecting the god only because it is an impediment to wooing the sister.

The lovely thing about myths is how adaptable they are, how much they can be shaped and molded by each new teller.  But there is bending, and then there is breaking.  To remove Apollo and Hyacinthus’ love from this story is to take out the spine of the tale, rendering it unrecognizable.  There is certainly a beautiful story to be told about a lover who kills his beloved’s kinsmen (as Shakespeare knew when Romeo killed Tybalt), but that is another story, not this one.  Hyacinthus and Apollo (and Zephyrus), do well enough on their own.

Thanks to reader Sam for the suggestion!