Myth of the Week: Echo and Narcissus, part II

The myth of the week today continues the story of Echo and the beautiful youth Narcissus, most infamous of self-lovers.

Narcissus was the mortal child of the nymph Liriope and the river-god Cephisus. When he was young, his mother consulted the prophet Teiresias about his life, hoping to hear that her son would be long-lived.  Teiresias answered that the boy would have a long and happy life, “If he never knows himself.”  This response would have been especially riddlesome in the ancient world where the exhortation to “know thyself” was revered, even carved onto the temple of the oracle at Delphi.

Narcissus grew up to be so beautiful that all who saw him, boys and girls alike, desired him.   But he spurned them all, preferring to wander by himself on the hillsides and in the forests.  In this he seems to bear some resemblance to another famous looker, Adonis, who rejected even the goddess of love.  Interestingly, both young men end up transformed into flowers. 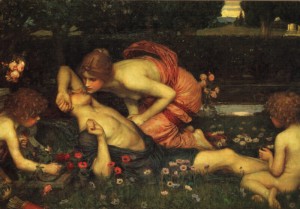 One of the most enthusiastic of Narcissus’ admirers was the nymph Echo, now robbed of her voice.  She took to trailing after him, pitifully hoping that he might speak, so that she could respond.  This was a favorite aspect of the story for ancient authors—finding clever ways for Narcissus to say something rejecting, so that Echo could repeat the last part of it lovingly.  Something like “I don’t want you to touch me!” “Touch me!”  The frustration on either side could certainly be played for the comic—and I can’t help thinking of Helena and Demetrius in A Midsummer Night’s Dream.

Yet Narcissus continued to refuse her.  Rejected, love-stricken and ashamed, Echo hid herself in caves, wasting away from unrequited love until there was nothing left of her but bones and her voice.  A sad end for such a once-spirited girl.  Narcissus, of course, didn’t notice a thing. 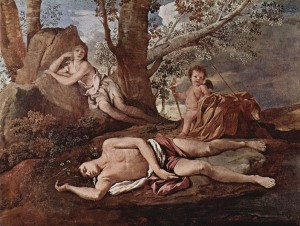 Dead Narcissus, with wasting Echo in the background

Soon after, Narcissus catches sight of himself for the first time in the surface of a pond, and falls instantly in love with his own image—which always serves as a reminder of how scarce mirrors were in the ancient world.  Nowadays, Narcissus would have fallen for himself a lot sooner, maybe even while still in the cradle.  Seems like there’s an update of the myth there, just begging to be written….

In one interesting variant, Narcissus’ self-love is actually the result of a curse. One of Narcissus’ rejected lovers, the youth Ameinias, kills himself in despair, and with his last breath calls upon the goddess Nemesis to punish Narcissus for his coldness.  The dreadful goddess comes up with a perfect torment, condemning Narcissus to fall in love with the only person he can’t have: himself.  Upon seeing his reflection in a pool of water, Narcissus is so entranced that he forgets to eat or sleep, slowly dying of self-neglect.  Echo, ever loyal, echoes his cries of pain with her own.  At last, rather than seeing such beauty lost, the gods transform the boy into a flower, the narcissus. 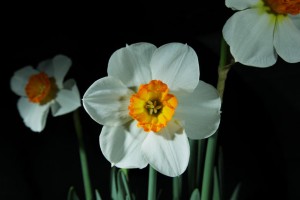 Narcissus’ story has been a popular one in literature.  Ancient authors, Ovid in particular, delighted in Narcissus’ fatuous confusion over why the boy in the water would not come to him.  They linger in their descriptions of him throwing out his arms, trying to reach through the water, weeping and taking heart from the fact that the image wept also.  It is a breath of fresh air then, when Pausanias tartly remarks: “It is utterly stupid to think that a man old enough to be in love would not be able to distinguish a man from his reflection.”  Indeed.  I prefer the versions of the story where Narcissus knows that the reflection is himself, and dies from grief at the sheer impossibility of his love. 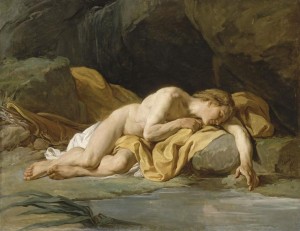 Narcissus also shows up in more modern works, including a verse in A. E. Housman’s “A Shropshire Lad,” where the reflective pool is the speaker’s own eyes.  Herman Hesse’s novel “Narcissus and Goldmund” is also distantly inspired by the myth, with Narcissus fixated upon intellect and the life of the mind, rather than his own face.

Narcissus (I’m sure he would be glad to hear) was also quite popular in art.  There was something about the languishing youth that proved catnip to artists through the ages.  According to The Oxford Classical Dictionary there are over fifty murals on this theme from Pompeii alone, and he was a common subject in Renaissance and Pre-Raphaelite art as well.

Last, but definitely not least, there is psychology. Thanks to his eponymous personality disorder, Narcissus’ name has become a household word, maybe even equaling Achilles’ famous heel.  The DSM-IV describes Narcissistic Personality Disorder as:  “A pervasive pattern of grandiosity (in fantasy or behavior), need for admiration, and lack of empathy, beginning by early adulthood.” According to a recent book “The Narcissism Epidemic” the disorder is on the rise, with 1 in 10 people young people showing clinical signs of the personality disorder.  If it’s true, we must have made Nemesis quite annoyed indeed. 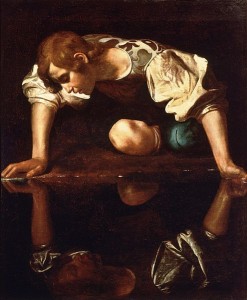 Narcissus in the 16th century, Caravaggio

But back to the ancient world.  The Greeks and Romans were keen appreciators of beauty, especially male.  Though there are certainly myths revolving around a woman’s beauty (Helen and the Trojan War, for instance), there seem to be many more about gorgeous, and often tragic, young men.  Narcissus takes his place in a firm pantheon that includes Ganymede, Hyacinthus, Achilles, Hylas, Paris, Endymion, and many more, all with their own interesting stories.  As a final note, writing this post has made me much more self-conscious about any time spent in front of the mirror….