Myth of the Week: Echo and Narcissus, part I

Happy Myth of the Week!  (Also, for US readers, happy Thanksgiving!)  Today’s myth comes to you as a suggestion from the terrific Algonquin Books (@AlgonquinBooks).  It’s the first of a series about that most famous of love triangles: Echo, Narcissus and…Narcissus. 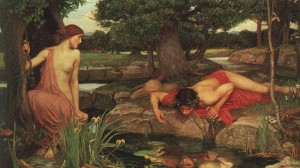 Since the story ends with Narcissus, I wanted to start with Echo.  In mythology, she is best known for her eponymous ability: always repeating another person’s words back to them.  But the lesser known story is how she got that way.  When the mountain-nymph Echo was born, she could speak just like anyone else.  Better, in fact: she was naturally garrulous and loved to entertain others with stories and talk.  She was also clever, and noticed that whenever Zeus would sneak down to earth in order to have affairs with nymphs, his jealous wife Hera would inevitably catch him in the act.  So the next time Hera came looking for her husband, Echo waylaid her with conversation, delaying her until the nymph and Zeus could escape. 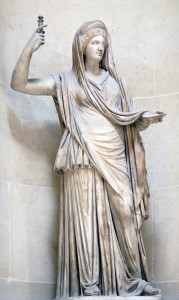 As numerous miserable heroes can tell you, if there is one person you don’t want to make angry in Greek mythology, it’s Hera. When the queen of the gods discovered Echo’s trick, she cursed her, robbing her of her power to speak for herself, and decreeing that hereafter the girl could only echo the words of others. I always felt that this was a deviously cruel punishment for someone who loved to express herself—doomed to never again voice an original thought.

But why would Echo try to stop Hera in the first place? The stories don’t really say.  Some seem to imply that she was trying to curry favor with Zeus.  But if I were writing the myth (and today I am), I like to give her a more noble motivation: she was trying to help her poor nymph sisters.  Whenever Hera caught her husband with another woman, it wasn’t Zeus she punished, but the girl, who ended up as a cow, a bear, dead, or living in eternal torment.  This seems additionally unfair given how often the girl in question was unwilling.  So I like to think that Echo was trying to stop Hera in the hopes that one of her sisters might be spared the great goddess’ ill-aimed wrath. 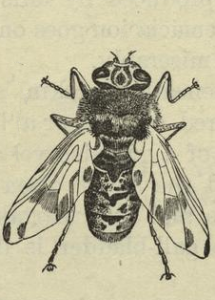 A Stinging Gadfly, of the type Hera sent to torment the nymph Io.

Given the ancient Greek appreciation for fast-talking heroes like Odysseus, it is interesting to note that none of the ancient sources praise Echo’s clever gift with words.  If anything, they seem to feel that she deserved it—she probably shouldn’t have been talking so much in the first place.  This unfairness becomes even more apparent when you compare her to another ancient with the gift of the gab: Hermes.  When the nymph Io was being held captive by the hundred-eyed watchman Argus, Hermes rescued her by talking endlessly, literally boring Argus to death.  Ever afterwards he was given the honorific title “Argus-killer.” So, if we’re really being fair, I think Echo should have gotten at least a “Hera-staller.” 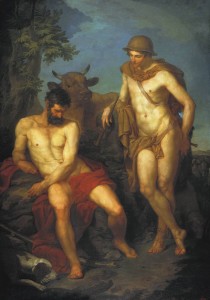 Hermes boring Argus, with Io as a cow in the background. Pyotr Ivanovich Sokolov

And, while we’re praising Echo, let’s also give her credit for the cleverness of her stratagem—especially since nymphs weren’t generally known for their brains.*  Echo came up with a brilliant and perfect trap: social convention.  Next time you’re stuck in conversation with someone, maybe it will help to remember that the queen of the gods couldn’t escape either.

*A notable exception is the nymph Sinope, who, about to be ravished by Zeus, begged him for a single wish.  He granted it, and she said, “I wish to remain a virgin.”  Bound by his oath Zeus was forced to leave her alone.  Apparently, she also successfully used this same trick on Apollo and the river-god Halys.