Myth of the Week: Clytemnestra

After Medea, Queen Clytemnestra is probably the most notorious woman in Greek mythology. She is also one of the most magnetic, mesmerizing in her fierce determination to kill the man who killed her daughter.  That this man happens to be her husband, and that she chooses to dispatch him in his bath-tub with an ax, makes her a storyteller’s lurid dream.

Though there are countless depictions of Clytemnestra in ancient and modern works alike, the most enduring has been that in Aeschylus’ Agamemnon.  His Clytemnestra is bloody, bold and resolute, a proud lioness, fiercely protective of her children.  After the murder, she does not try to hide or run, but strides victoriously before her people, gore-stained ax in hand, declaring that justice has been served. 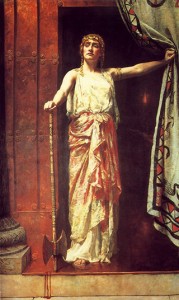 Clytemnestra, After the Murder

Clytemnestra was born into a mythological epicenter.  Her father was King Tyndareus of Sparta and her mother Queen Leda—the same who was later impregnated by Zeus, in the form of a swan.  A potent family: Helen was her half-sister, Penelope her cousin, and the semi-divine duo Castor and Polydeuces her brothers.  She married a man with a similarly powerful lineage, Agamemnon of House Atreus, King of Mycenae.

Division between Clytemnestra and her husband began with the Trojan War.  Agamemnon and Menelaus’ fleet, set to sail for Troy, was stuck at harbor, with no wind to carry it.  A priest revealed that the goddess Artemis was angry and Agamemnon could appease her by sacrificing his daughter, Iphigenia.  The ambitious king agreed.  By the time word reached Clytemnestra, the girl was dead and Agamemnon had already sailed.

Clytemnestra isn’t the only woman in Greek mythology to lose a child.  Queen Hecuba was eventually driven mad with grief and transformed into a dog, and Niobe cried so much for her lost children the gods took pity and made her a rock.  But only Clytemnestra chooses retaliation over grief.  And this is what makes her such a fascinating and scandalous figure in the ancient world–she is a woman who takes upon herself the traditionally masculine role of avenger, meter out of justice, judge of who should live, and who must die.

For the ten years Agamemnon was away at Troy, Clytemnestra plotted her revenge.  She found a partner and lover in Aegisthos, a long-lost cousin of Agamemnon, back for his own vengeance: Agamemnon’s father had killed his brothers.  (I’ll save the dysfunctional and murderous history of the House of Atreus for another day, but parricide, incest and cannibalism abound.)  The two planned to rule the kingdom together, after Agamemnon’s death.  Sexually faithless, deceitful, murderous: Clytemnestra is the incarnation of ancient anxieties about women and power. 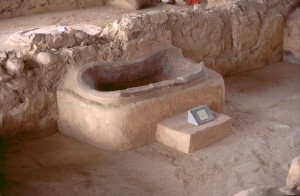 When Agamemnon returned, bringing as his slave the Trojan princess Cassandra, Clytemnestra welcomed him warmly and led him to the fateful bath.  In some versions of the story it is Aegisthos actually wielding the ax, and in others it is Clytemnestra.  I prefer the latter—I think after all those years, she’d want to do the swinging herself.  Afterwards, whether from jealousy, adrenaline or a neatening of accounts, she murdered Cassandra as well.

For me, this is one of the most poignant details of the story, and the most damning to Clytemnestra.  Cassandra has lived a wretched life: condemned to foresee the destruction of her family and city, but unable to stop it from happening, then dragged from the ruins of her city, violated and handed over to Agamemnon as a prize concubine. I have always wished at this moment for Clytemnestra to pause, and recognize that Cassandra was more ally then enemy—surely she must have hated Agamemnon as much as Clytemnestra did.  But reflection and empathy aren’t the queen’s strengths.  Cassandra is an intruder, and must die.

The cycle of blood does not stop there.  Orestes, Agamemnon and Clytemnestra’s son, is bound by honor to avenge his father.  Urged on by his sister, Electra (of the infamous ‘Electra complex’), he kills both Aegisthos and his mother.  From the underworld, the ghost of Clytemnestra sends furies to torment her son, enraged that he would choose his father’s cause over hers.  Even death, it seems, cannot contain her. 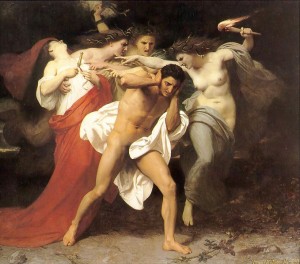 In the end, how much sympathy we have for this powerful queen hinges significantly upon how we judge her husband.  The king has many offenses of his own, beyond sacrificing his daughter: cowardice, greed, rape, reckless endangerment of his army, and the destruction of a city.  In my opinion?  I think Agamemnon had it coming.  And, given all the slave-girls he terrorizes during the Trojan War, I can’t help but find it poetic justice that it’s a woman who does the deed.