Myth of the Week: Centaurs

If ancient Greek mythology had a consistent villain, it would definitely be centaurs.  With the exception of the wise and kind Chiron, these half-horse half-man creatures were depicted as  bestial, drunken, lecherous bullies strewing chaos and strife wherever they went. 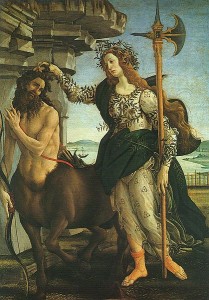 The goddess Athena with a centaur

The origins of Centaurs (or Kentauroi) are obscure.  The most common story seems to involve the wicked king Ixion, who tried to rape the goddess Hera.  At the last minute, however, Zeus substituted a cloud/nymph (depending on the story) named Nephele.  She bore him a monstrous child, Kentaurus, who was either the first centaur, or who mated with horses and produced the first centaur.  Ixion, meanwhile, was bound to a flaming wheel, and banished to the pit of Tartarus to suffer alongside Tantalus and Sisyphus.

One of the most famous stories of centaur misbehavior is at the wedding of the Lapith king Perithoos, best friend of Theseus.  Perithoos invites the centaurs to the wedding, but after consuming alcohol, they become feral, attempting to carry off the bride and the other women.  A huge battle ensued, one that was quite popular in art—the Parthenon metopes (large marble friezes on the outside of the building) take this battle as their subject.  Such depictions with centaurs became so popular that they actually had their own name—“Centauromachies” (literally, centaur fights). 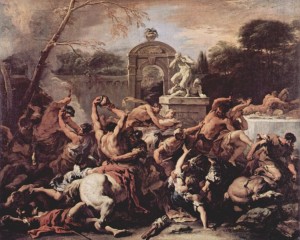 The fight between the Lapiths and the centaurs

A fascinating side-story about the Lapith/centaur battle involves the unusual hero Caeneus, who was born a beautiful woman, named Caenis.  She was raped by the god Poseidon, who after offered to grant her any wish.  She wished to be transformed into a man, to escape further persecution.  She–now he–became one of the greatest warriors of the Lapiths, and couldn’t be killed by normal means.  In order to defeat him, the centaurs were forced to pile giant fir trees and rocks on top of him, until he was literally forced into the earth by their weight.

Maybe the most famous centaur story is the one about Heracles and his wife Deianeira.  The two arrive at the river Evenus, where the centaur Nessus has set himself up as the ferryman.  Heracles boosts Deianeira only Nessus’ back, but rather than taking her over the river, the centaur starts to run off with her.  Heracles pulls out one of his hydra-poisoned arrows and shoots Nessus, who collapses, thankfully not on Deianeira.  He whispers to her his apologies and says that she should gather up a bit of his blood.  Then, if she ever doubts her husband’s faithfulness, she can give him some of it, and it will make him love her again. 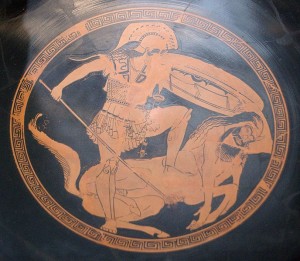 A warrior conquering a centaur

Unfortunately, the next part of the myth doesn’t exactly cover Deianeira in glory.  Why she thinks it’s a good idea to listen to anything her would-be rapist would say is beyond me.  But she does indeed gather some of his blood—which by this point (unbeknownst to her, but knownst to Nessus) has mixed with the poison from the hydra-arrow.  And, of course, a little while later Deianeira does become jealous that Heracles isn’t paying enough attention to her, and does indeed slip him some of the blood.  The poison causes Heracles agony so extreme that all he wants is to die.  He builds himself his own funeral pyre (tough to the end), and climbs on it.  None of his friends will light it, except for the loyal Philoctetes.  Heracles is at last released from his pain, and Nessus, in death, has his revenge. 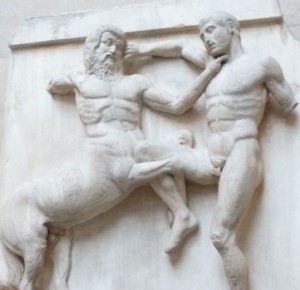 A final tale of centaur-menace concerns the swift-footed hero Atalanta.  She is hunting in the woods one day when she is accosted by two centaurs.  Single-handedly, she dispatches both of them, and later goes on to participate in the Calydonian Boar Hunt.   She’s definitely going to be an upcoming Myth of the Week. 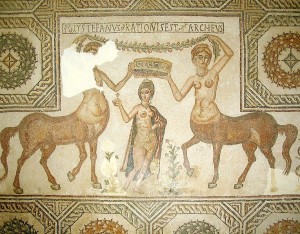 Although I never think of centaurs as female, they did appear in some later art (see above).  In fact, they were renowned for their beauty.  Can I help it if I think of Leslie Knope’s centaur likeness in Parks and Recreation?  I don’t watch much TV so this doesn’t mean much, but that show is one of my absolute favorites.

I wish you all a very happy, sunny week.  I’m breaking out the shorts!