Myth of the Week: Callisto

Today’s Myth of the Week is in honor of Latin teacher extraordinaire Walter, and his delightful students. Good luck on the upcoming National Latin exam!

Galileo knew his mythology.  After discovering the four largest moons of Jupiter, he decided to name them, fittingly, after four famous loves of Zeus (Jupiter, to Romans): Io, Europa, Ganymede and Callisto. Of these four, Callisto’s story is the least well known, but maybe the most fascinating. Callisto (Kallisto in the Greek) was an Arcadian nymph, whose name literally means “most beautiful.”   Her father was the infamous and cruel Lycaon, whom Jupiter changed into a wolf as punishment for his savage and “wolfish” behavior.  He is often cited as a mythological precursor of the werewolf. 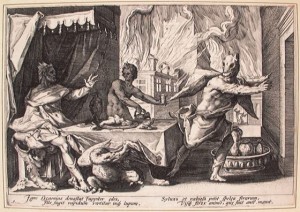 Zeus transforming Lycaeon to a wolf

Callisto preferred the woods to her father’s house.  She loved to hunt and became a favorite of the goddess Artemis, joining her band of nymphs and swearing to remain a virgin eternally.  Although today we might regard this as overly stringent, in the world of ancient mythology virginity meant freedom.  As one of Artemis’ virgins, she would never have to marry a man of her father’s choosing, and could remain without domestic responsibilities in the woods her entire life.

Unfortunately, like many beautiful nymphs, she caught the eye of Zeus.  By this point in myth history Zeus was getting cannier in his disguises.  Rather than transforming into a bull, or swan, Zeus decided to appear to the girl as Artemis herself.  Ovid describes the two women talking intimately, then “Artemis” begins kissing Callisto. 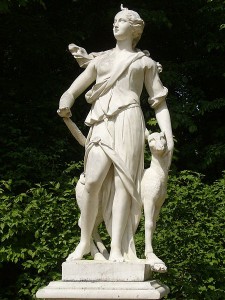 Artemis, goddess of the hunt, photo by Steffen Heilfort

It’s an electrifying moment, and an unusual one; there are very few surviving mentions of women loving women from the ancient world, simply because nearly all of the ancient writers were men.  The references that do survive are generally dismissive or disgusted.  But that is not that case here: Callisto welcomes her mistress’ passionate embrace.  For a moment it almost seems like we have stumbled upon a wonderful secret history.

But the audience knows better, because it isn’t Artemis at all–it’s Zeus.  The story gave its ancient readers just enough time to be intrigued, or titillated, or shocked before setting the world “right” again.  Callisto’s error is played for laughs: she thinks it’s Artemis who she likes, but fake out!  It’s really Zeus, who she doesn’t! 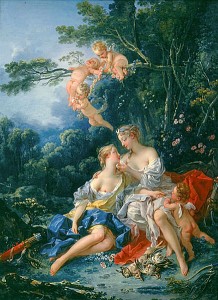 Zeus disguised as Artemis, with Callisto

Call me humorless, but I’m not laughing.  Zeus reveals himself, rapes Callisto, then vanishes.  The girl is doubly distraught—not only about the assault, but about the breaking of her oath of virginity to Artemis.  (This being the ancient world, it doesn’t matter that it was unwilling—the oath is broken all the same). She is all the more distressed when she learns that she is pregnant, and must hide the pregnancy from her sharp-eyed mistress as long as possible. 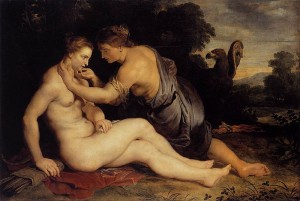 A suspicious Callisto, with Zeus-as-Artemis. By Rubens

We can see where this is going.  Artemis is notoriously unsympathetic and uncompromising about transgressions—witness her punishment of poor Actaeon for accidentally glimpsing her in the bath: he’s torn apart by his own dogs.  When Callisto takes off her dress to bathe, Artemis notices her belly.  She flies into a rage, and is joined by Hera, who is herself angry at Callisto for having slept with her husband. As usual, Hera doesn’t care whether it was consensual.  She turns the girl into a bear and Artemis kills her.  Zeus (where were you five minutes ago?) swoops down to rescue Callisto’s unborn child, a boy named Arcas.  And, in homage to the boy’s mother takes Callisto’s body and sets it in the sky as the “Great Bear”—Ursa Major. Her son, when he dies, joins her, becoming Ursa Minor. 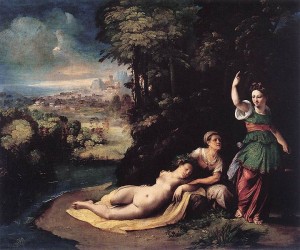 Artemis discovers that Callisto is pregnant

That’s one version of the story—in another, Callisto flees into the woods in her new ursine form, living out her days as an animal.  Fast forward fifteen years or so.  Callisto’s son, Arcas, has grown up a gifted hunter, just like his mother.  He is wandering in the woods one day, and spots a bear.  Hoisting his javelin, he prepares to kill it with a single blow.  But as he is about to hurl the spear, Zeus stops him, not wanting him to be guilty of the sin of killing his own mother.  He whisks the two of them up to the heavens, transforming them into constellations. 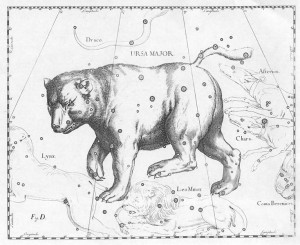 In later generations, Zeus’ embrace of Callisto while disguised as Artemis was the part of the story that really seemed to grab people’s imaginations.  Partially that’s because it was Ovid’s version, but surely also because of its frisson of transgression.  But for me the most moving and tragic part of the story is the moment after, when Callisto realizes what is really happening.  That she’s been tricked by Zeus, and is about to lose everything she holds dear—Artemis’ favor, her fidelity to her oath, her place in the world, even her humanity.  Becoming a constellation just doesn’t seem like recompense enough.

A final, completely different, thought.  Artemis seems to have been particularly associated with bears, and at her sanctuary at Brauron young girls would serve as “little bears” in a ritual to honor the goddess.  It’s a much nicer face of the goddess than Callisto sees.

I’m excited to announce that tomorrow (March 13th) is the kick-off of my US book tour.  If you’re in the area and interested, please join me!