Myth of the Week: Baucis and Philemon

In honor of Valentine’s, a love story.

There are two problems with looking for romance in Greek mythology. The first is that many of the so-called “love” myths are anything but.  For instance, I’ve often seen Daphne and Apollo classed as a love story.  But, of course, Daphne is fleeing from Apollo, and only narrowly escapes being raped by him.  So, there’s that.

The second problem is that the stories which are about genuine love are almost uniformly tragic.  The list of these is quite long: Hector and his beloved Andromache, Achilles and Patroclus, Pyramus and Thisbe, Orpheus and Eurydice, Hero and Leander, Apollo and Hyacinthus, Atalanta and Meleager, and on, and on. 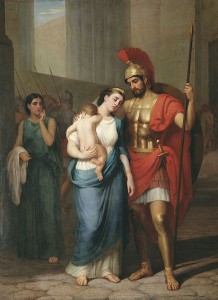 But there are a few—a very few—stories that are both romantic and happy. The best known ones are Psyche and Eros (more on that soon), and my favorite: the story of Baucis and Philemon.

At first glance, Baucis and Philemon make non-traditional romantic leads.  For one thing, when the story begins they are bent over with age.  For another, they are poor commoners, while the lovers in Greek myths tend towards aristocrats or divinities.  Thirdly, there is no question of “will they or won’t they?” Baucis and Philemon have been married for years, living happily together in the same humble, straw-roofed dwelling.

Their rustic routine is interrupted by two weary strangers, knocking at the door looking for food and shelter—they have been turned away, they say, by all the finer houses in the neighborhood.  Baucis, the wife, and Philemon, the husband, welcome the two men warmly.  Even though their resources are scant, they set about cheerfully making the best of what they have.  One of my favorite parts of this story is the elaborate preparations: Baucis scrubbing the dinner table with mint to make it smell fresh (good idea!), and Philemon carving the meat. 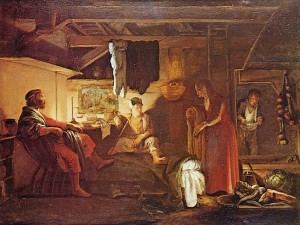 Baucis and Philemon prepare a humble welcome for their guests

We also get a lovely description of their rustic dinner, which sounds much more appetizing than many of the absurd Greco-Roman dishes that have come down to us (larks’ tongues, eel pastries, jellyfish).  Instead there are:

“olives, and cherries preserved in wine…, endive and radish, cheese, eggs roasted in the hearth-embers… nuts, and figs scattered among wrinkly dates, plums and apples fragrant in their broad baskets, grapes collected from their purple vines, and a gleaming honeycomb.” 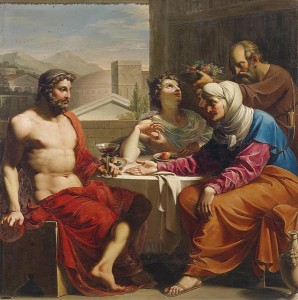 Baucis and Philemon at dinner with their mysterious guests

YUM.  But even more important than the food is the care that the old couple uses in preparing it, the generous goodwill they show in laying out the best they have.  Hospitality was a virtue in the ancient Greek world—guests were sacred to Zeus himself.  Myth texts often note that this is because you never knew when a stranger might prove to be a god.  But Baucis and Philemon aren’t so calculating.  They are reflexively kind, not fearfully so.   There are also some lovely descriptions of the couple working together in practiced synchronicity—carrying the wood, putting a wedge under the wobbly leg of the table, setting out the earthenware plates. Ovid beautifully captures the house’s domestic harmony and contentment—these are people at peace with themselves.

The four sit down to the meal.  But as they eat and drink, they notice that the wine bowl, filled with the best humble vintage the couple has, never seems to empty.  No matter how often Baucis and Philemon pour for their guests, the bowl is always brimming.  Beginning to suspect that their guests may be gods, they are fearful that they haven’t done enough to please them, and decide to kill their beloved pet goose to add to the dinner spread.  However, slow with age as they are, they cannot catch him, and end up pursuing him around and around the house. 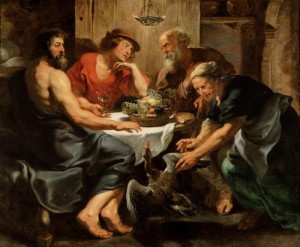 Baucis chasing the troublesome goose, while Zeus looks on.

Many people have seen a sort of humor in this moment—the old couple stumbling after their nimble goose.  But to be honest, I have always found it sad.  This good old couple is afraid for their lives, and are desperately trying to offer the only thing they have left to appease the gods.

Luckily, all ends well.  The goose runs to the two travelers for sanctuary, and they stand to reveal themselves as, yes, gods: Zeus and Hermes himself.  They tell the old couple to forget about the goose, and to come with them up the mountain to its top.  The couple obeys (Ovid offers a nice detail about them leaning on their walking sticks), and  when they reach the top and turn around they see that their old neighborhood, with all its houses and people, has been swept away. Only Baucis and Philemon’s house remains, which—even as they look—is transformed into a beautiful, marble-and-gold temple.

It is a miraculous and upsetting moment.  Yes, Baucis and Philemon have been saved but all their neighbors are dead. For the sake of the happy ending, Ovid does not dwell on this, beyond mentioning that the couple grieves for those who have been lost.  But it is hard to forget the swift and unforgiving punishment—there is no second chance, if you displease the gods. 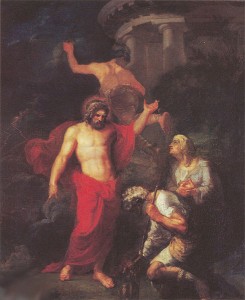 Zeus and Hermes lead the old couple up the hill and out of danger.

Fortunately, the gods are pleased with Baucis and Philemon.  Zeus offers to grant the pious, good-hearted pair whatever they wish.  The two whisper together for a moment, and then Philemon announces that they would like to live out their lives as servants of the gods in the new temple.  Further, because of their great love for each other, they do not wish to have to live alone, without the other.  They ask the gods to let them die at the same moment:

“Let the same hour bear us both off; let me never see the tomb of my wife, nor be buried by her.”

Zeus agrees, and the couple spend many joyful years together in their new home.  Then, one day, as they stand outside their temple talking of their lives, they notice something strange—branches are beginning to grow from their heads, their hair is transforming into leaves.  With their last breaths, they call out their farewells to each other.  A moment later, two trees, an oak and a linden tree, stand where the old couple was.  And, just as  in life, the two are bound together, sprung from the same trunk, their branches entwining into eternity.

A sweet story.  May we all be as lucky in love as Baucis and Philemon.