Myth of the Week: Atlas

As a child in New York City, I had numerous opportunities to walk past the huge statue of Atlas holding up the world in front of Rockefeller center.  I would always wonder: “But what is Atlas standing on?” 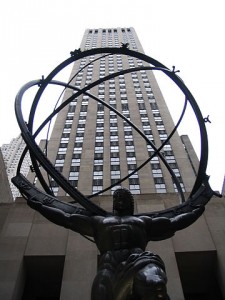 Statue of Atlas, at Rockefeller center. Photo by Sami Cetinkaya

Though I didn’t know it at the time, it was an age-old question.  If Atlas, or four elephants, or a turtle (all in various mythologies) are holding up the world, what’s holding them up?  In a possibly apocryphal story from modern physics, a scientist has just finished delivering a lecture about the nature of the cosmos, and an old woman raises her hand and says that he’s wrong, the world is really balanced on the back of a giant turtle. The scientist asks, “Then what’s the turtle balanced on?”  The old lady famously retorts, “It’s turtles all the way down.”  Except in this case, I guess the answer is: “Atlases all the way down.”

As I got older, and read more of the mythology, I realized that the ancient Greek version of this story is a lot more clear than that.  In the original Greek, Atlas isn’t holding up the world at all, he’s holding up the sky.  Ah-ha!  Now that made sense. 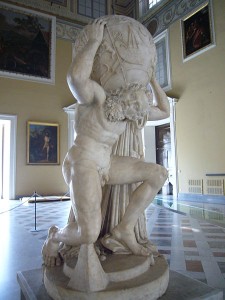 Statue of Atlas with the World

Atlas was a second-generation Titan, the race of gods that ruled before Zeus and his Olympian kin took over.  His father was Iapetus, which makes him the brother to one of my favorite mythological figures of all time, Prometheus. From birth Atlas was exceptionally strong, and when war broke out between the Titans and Olympians, Atlas took vigorous part on the Titan side.  Too vigorous, as it turns out, because after the Titans were defeated, Zeus felt threatened by Atlas’ mighty strength, and sentenced him to hold up the vault of the sky for all eternity. No wonder his name is derived from the Greek word for “enduring.”

For aeons, Atlas stood in the garden of the Hesperides, at the far edge of the world, holding up the sky.  He wasn’t entirely alone: there were the nymphs of the garden (the Hesperides), who tended to a golden apple tree, which was also guarded by a fearsome dragon.  And sometime during all of this (probably before the whole holding up the sky thing) Atlas managed to have children, including the goddess Calypso, who would later seduce Odysseus on her enchanted island, and Maia, who was the mother of Hermes. 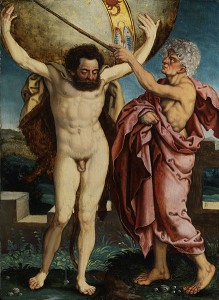 Hercules holding up the World, with Atlas beside him

Atlas had visitors too, including Heracles, who needed the golden apples to fulfill one of his famous labors.  Heracles managed to slay the dragon guarding the tree, but needed a god to do the actual picking for him.  He offered to take the great weight of Heaven off of Atlas’ shoulders for a few moments, in return for the god retrieving the apple for him.  Atlas gratefully agreed.  But after picking the apples, Atlas realized that he didn’t want to go back to literally carrying the weight of the world.

No problem, Heracles said.  He was happy to keep holding up the heavens, but would Atlas mind taking it back for just one second so he can make a pad for his shoulders with his lionskin?

Oh, Atlas.  The brains of the family definitely went to Prometheus, because the Titan agreed.  I always feel sorry for Atlas at this moment, because his actions, however, foolish, come from empathy.  After all, who understands better the crushing and terrible weight of the sky?  He’s one of those people about which great movies are made—they commit a crime out of desperation, but don’t really have what it takes to follow through.  Heracles picks up the apples, and leaves the Titan to his suffering. 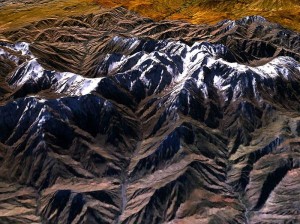 NASA photo of the Atlas Mountains

In a later story,  Perseus uses Medusa’s head to turn the Titan into stone, creating the Atlas mountains.  In many of the retellings this is meant to be Perseus retaliating (Atlas won’t let him pass), but it seems like a kindness to me.  I know if I had to hold up the sky, I’d definitely rather be a mountain than a person.

Because of his association with holding up the sky, Atlas also became linked to the poles and the constellations.  In fact, in some versions of the myth he’s an expert astronomer and map-maker, which is what gives us our word atlas today.  For a modern interpretation of the Atlas story, check out Jeanette Winterson’s “Weight” which is part of the wonderful Canongate Myth series.

I wish you all a good week, without too much extra weight on your shoulders!