Myth of the Week: Athena

Like a lot of bookish, myth-reading girls, Athena was my hero.  After all, what wasn’t to love about this goddess?  She was brilliant, bold, wore amazing armor, and could hold her own against even the greatest Olympian gods.  Her powers—of strategy, craftsmanship and wisdom—were all things I wanted to be good at too.

One of my favorite stories is the one about her birth—bursting, full-grown, from her father’s head.  Her mother, Metis, was the goddess of wisdom and cunning, and Zeus’ first wife (before Hera).  Unfortunately, a prophecy revealed that she would give birth to two children—one a daughter, and the second a son, who would grow up to be greater than Zeus himself. The ever-insecure Zeus decided to diffuse the problem by swallowing Metis whole, with the side benefit of taking her wisdom for himself. 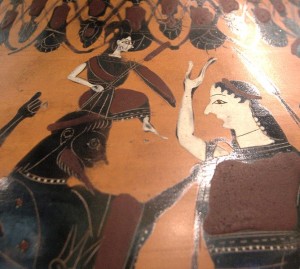 But nine months later Zeus was struck down with an agonizing headache.  Ever-helpful son Hephaestus seized his ax, and split open Zeus’ head. From the cleft leapt his daughter Athena, gray-eyed goddess of wisdom.  Like her half-sister Artemis, she announced that she would be remaining a virgin, and unmarried. Quickly, she became one of her father’s most trusted counselors, often sitting on his right hand to offer advice.  She never rebelled against her father, so we don’t know if she was in fact greater than he was—but there was a legend that her aegis (breastplate), was so strong that even Zeus’ thunderbolt couldn’t pierce it.  The dreaded son never manifests. 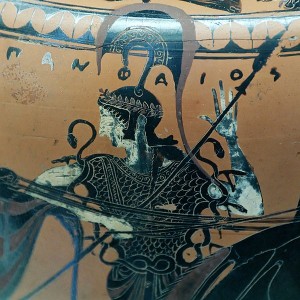 Athena armed and wearing her aegis

Athena also proved her mettle during the war against the Giants and Titans, where she was one of the most powerful warriors on the Olympian side. According to some myths, she battled the fire-breathing giant Enceladus, at last hurling the island of Sicily upon him, beneath which he still vents his smoky breath (Mount Etna).  She also battled the giant Pallas, and in one myth, skinned him alive to make her powerful aegis—the same breastplate that she would later affix with the head of the Gorgon Medusa.  She also added the giant’s name to her own as a trophy, which is why she’s often referred to as “Pallas” or “Pallas Athena.” 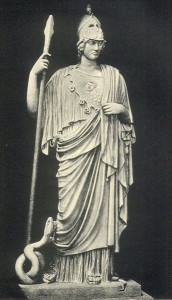 One of the most famous legends about Athena is how she came to be patron of the great city of Athens.  Both she and her uncle Poseidon wanted the city for themselves, and they decided to hold a contest: whoever could give the city the most useful gift would get to have it.  Poseidon struck the ground with his trident, and a spring of salt water bubbled up.  Impressive yes, but useful?  No.

When it was her turn, the ever-wise Athena gave the city an olive tree, which not only provided food, but also olive oil, wood, and (very important in Greece) shade.  The decision went unanimously in her favor.  Did Poseidon really think he had a chance?  Also, Athens sounds a lot better than “Poseidons.” 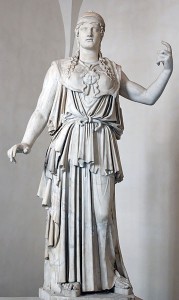 Athena was also known for being a great champion of heroes—aside from her favorite of favorites, Odysseus, she lent a hand to Perseus, Diomedes, Hercules, Bellerophon, Orestes, the master craftsman Daedalus (surely a hero after her own heart), and many more.

Her most famous epithet is “grey-eyed” (glaucopis).  But she was also known by other names—daughter of Zeus, craftswoman, and interestingly, horsewoman (hippia).  Her uncle Poseidon may have been the god of horses, but Athena was the god of horse-taming.  Among her many other accomplishments, she helped inspire the bridle. 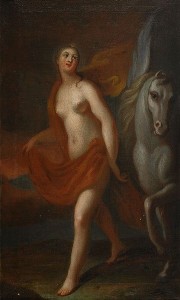 Athena with Pegasus, who was tamed thanks to a golden bridle

For all my Athena-love, as I got older, I started to recognize other sides to the goddess.  Yes, she could be a hero’s best support, but she could also be terrifyingly ruthless, as in her treatment of Medusa, or Arachne, or how she impales Ajax the lesser on a rock (though, frankly, he had it coming—more on that later).  It’s also interesting to note that nearly all of those she favored were men, Odysseus’ clever wife Penelope excepted. One thing is clear; she isn’t a goddess of wisdom in the mold of Prometheus, who sees himself as a universal protector of human kind.  Instead, she is a strict mistress who favors only those who have earned—and who work to keep—her good will.

Athena also figures prominently in the story of the golden apple, being one of the three goddesses in competition for the prize of “most beautiful.”  I’ve always been vaguely disappointed in Athena that she cared about this—it seems beneath her dignity, somehow.  Maybe she should have taken her cue from her little sister Artemis, and left it to Hera and Aphrodite to battle out. 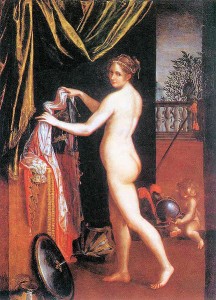 Athena dressing, with her armor on the floor.

Each of the goddesses offers the judge, the Trojan prince Paris, a bribe to convince him to choose them.  Hera offers power (she’s queen of the gods, after all), Aphrodite offers the most beautiful woman in the world to be his wife (Helen, who’s—whoops!—already married), and Athena offers to make him the wisest man in the world. Paris chooses Aphrodite, of course, but as one of my middle school students pointed out: “That was really dumb.  He should have taken wisdom.  If you’re smart enough, you could figure out how to get everything else.”  No one ever accused Paris of being an intellectual giant.

In vengeance for the slight, Athena becomes a fierce defender of the Greek army, and is involved in one of my favorite minor episodes in the Iliad.  With Achilles on the bench, Athena decides to invest the clever Diomedes with divine strength and send him out to kill Trojans.  But, she warns him, he should be very careful whom he’s stabbing—there are gods fighting in the fray, and he wouldn’t want to accidentally attack a god.  Unless, that is, he sees Aphrodite.  He can go ahead and stab her.  (Yet again: don’t get on Athena’s bad side). 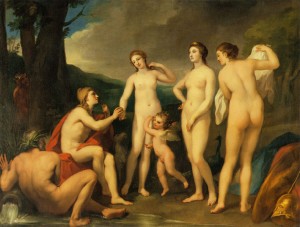 Diomedes wades into battle, suffused with the goddess’ power, and finds himself facing the Trojan hero Aeneas, son of Aphrodite.  He beats Aeneas badly, hurling a rock at him that crushes the Trojan’s hip.  When Aphrodite swoops down to bear him away to safety, Diomedes sees his chance and stabs her in the wrist.  Aphrodite screams and abandons her son, fleeing off to Mount Olympus (luckily for Aeneas, Apollo comes to his rescue).  Aphrodite sobs in her mother Dione’s lap, while Hera and Athena look on scornfully. Athena taunts her by asking if she scratched herself with a pin.  I kind of have to go with Athena on this one—Aphrodite shows herself to be pretty wimpy, given that the wound heals almost instantly.

A little later in the fight, Athena aids Diomedes again, tossing his charioteer out in order to take the reins herself.  She leads him against Ares, using her power to help him stab the god of war–who goes up to Olympus to complain to Zeus that he lets Athena get away with anything.  (Zeus retorts that Ares is his least favorite child, and should stop whining). 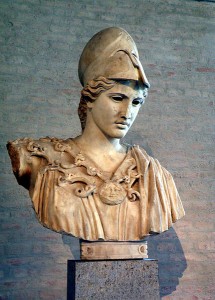 Athena makes some wonderful appearances in Zachary Mason’s “Lost Books of the Odyssey,” but sadly I don’t know of any other modern novels that feature her.  Let me know if you do!

I wish you all a very wise week!