Myth of the Week: Arachne

One of the earliest Greeks myths I remember is the story of the artist Arachne, whose name means “spider” in Greek.  Back then, it seemed fairly standard: hubris, a confrontation with a god, transformation as punishment (to, unsurprisingly, a spider), with some natural explanation thrown in (this is why spiders spin webs!) 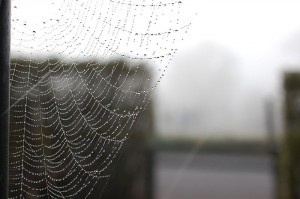 A spider's web, with raindrops on it. Photo by Wusel007

But when I got a bit older, and read Ovid’s full version of the myth, Arachne quickly became one of my favorite heroines.  First of all, she’s one of the few ancient females who isn’t a princess or beautiful nymph.  She’s the daughter of a tradesman, a Lydian dye-merchant, with no noble connections, nor extraordinary looks.  She is famous, Ovid tells us, for her skill in weaving alone.  I particularly love his description of her at her loom—how gracefully and deftly she handles the threads, how the nymphs abandon their fields and forests to come stare in awe.  I have always found it so pleasurable to watch someone do something that they are truly gifted at, and Ovid captures that feeling perfectly.

Arachne is relentlessly proud of her excellence, and defiant in the face of attempts to cow her into modesty.  She is, she says, as skilled as Athena in her work.  Why should she lie and say she is not?  There aren’t too many heroines in ancient literature who are so single-minded and proud–usually those characteristics are identified with men like Achilles and Ajax.  In fact, that comparison does her a bit of a disservice, since her rebelliousness and pride are actually much more deliberate and intellectual than either of those two heroes (much as I love them).  A better comparison might be another favorite of mine, Pentheus, the ill-fated King of Thebes, who loses his life standing up to Dionysus.  Like him, Arachne dares to criticize the gods, and doesn’t back down even when threatened.  Foolish?  Maybe.  But also principled and courageous. 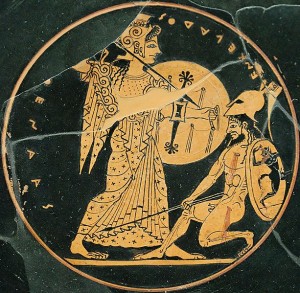 The gods, of course, never like to be challenged, and Athena is known for being particularly vicious towards rivals. She decides to pay a visit to Arachne, disguised as an old woman, warning the girl that she must learn to acknowledge the goddess’ superiority.  But Arachne dismisses her–why should she acknowledge Athena?  She hasn’t met the goddess, nor seen her weaving.  And she has supreme faith in her own powers.  “Let her come!” she says.  And Athena (the gods do love their dramatic revelations) throws off her disguise declaring “She is here!”

The contest is on.  And it’s a testament to Ovid’s skill as a poet that what should be exceedingly boring (a long, lingering description of the two women weaving) becomes an edge-of-the-seat fireworks display.  Ovid spends every bit of his prodigious skill evoking the vivid colors and beauty of the materials, before moving on to the astonishing pictures taking shape on the rival tapestries.  Because, of course, this isn’t just about beauty: it’s an intellectual debate about whether humans have the right to challenge gods. 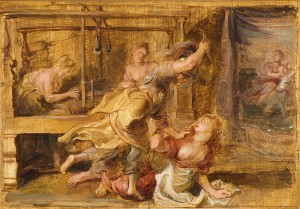 Athena attacking Arachne, after the contest

Athena’s cloth is a gorgeous depiction of the gods in their full glory, looking on at the scene of her triumph over Poseidon in the contest for Athens.  In the four corners of the tapestry, she weaves four admonitory scenes of humans who dared to compare themselves with gods, and the bad ends that each came to.  But Arachne’s cloth shows something else entirely: not the gods in triumph, but the gods as clowns.  Each part reveals the gods behaving badly.  There are several episodes of Zeus in goatish pursuit of nymphs, along with other undignified affairs of the immortals.  Her message is clear: the gods are not all they say they are; they are ignoble, embarrassing, childish. More flawed, in fact, than humans. Arachne had guts.

When it comes time to judge the quality of the two works, it would have been easy for Ovid to simply have Arachne lose. She is human, after all, and so it would be expected that her work would be lesser. But Ovid doesn’t do that.  Arachne’s work, he says, is utterly flawless.  Not even Athena’s envy can find a single error in it.  The girl, if she hasn’t won, has at the very least tied. Athena is utterly enraged–both by the work’s perfection, and by its blasphemous content.   One might think that as the goddess of reason and intelligence, Athena would find a way to teach the girl a lesson, to argue her into submission.  But instead, she only proves Arachne’s point that the gods are imperfect and irrational: she tears Arachne’s beautiful weaving all to pieces.  Can there be a greater testament to Arachne’s intellectual triumph?  The great Athena is speechless, reduced to a tantrum-throwing child.

Arachne as a spider (a particularly creepy depiction, I think)

In the version of the story that I read when I was young, Athena turns the girl into a spider at this point, as punishment.  But the full version is much darker, and more interesting.  Athena, after tearing apart the tapestry, seizes the spindle and beats the girl with it.  Arachne is now herself enraged, and decides to hang herself.  It’s a moment that doesn’t read very well in our modern world, where suicide is often equated with giving up.  But in the context of the ancient world, suicide was what warriors did, when they refused to accept defeat.  It said, in effect: only I can defeat myself.  And in that sense, it is a perfect fit for bold, uncompromising Arachne.

But Athena is a god, so she gets the last word.   She pities the dying girl (I like to think that she finally recognizes the toughness of a kindred spirit), and saves Arachne’s life, transforming her to a spider.  Arachne is allowed to keep her extraordinary skill at weaving–or maybe Athena lacks the power to take it from her.  What Arachne thinks of this we never find out, but Arachne and her descendants continue to spin their beautiful, miraculous creations to this day. 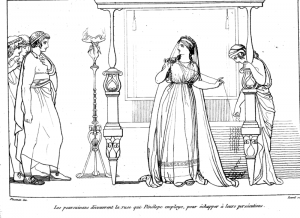 Another famous weaver: Odysseus' wife Penelope at her loom

I recognize that there is, of course, another way to read this story–as a tale of immoderate hubris, of foolish, reckless arrogance.  But even read that way, I still can’t help rooting for Arachne–the ordinary girl with the soul of a warrior, who was able to beat a goddess.