Hello California!  I’m excited to be starting the CA leg of my tour, and if you’re in LA, San Francisco or San Diego and want to hear me speak here are the details of the events.

Rather than a Myth of the Week, I thought I would do another post on modern words with ancient roots.  Below are five more of my favorites. 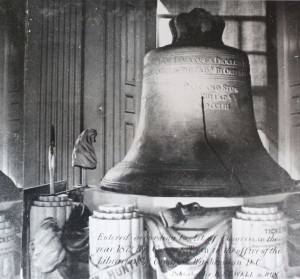 The Liberty Bell, a Philadelphia symbol

Philadelphia.  When I moved to Philadelphia from New York City, I was thirteen and deeply reluctant. For one thing, I was leaving all my friends behind.  For another, the city seemed spookily deserted to me after the bustle of Manhattan.  In my terrible teenage way, I was particularly irritated by Philadelphia’s cheery, ever-present slogan: The City of Brotherly Love!

But then I started taking Greek, and realized that the phrase isn’t some pollyanna PR line, it’s the literal translation of Philadephia. Phil—is the Greek root for love, and adelphos is the word for brother.  Well.  That shut me up.  The moral of the story?  All sulky teens need is a little ancient Greek.

Psychopomp/Psychopompos.  This word doesn’t get very much airtime nowadays, but I think it should.  A psychopomp is a being whose job it is to guide the souls of the dead to the afterlife, and in ancient Greece this was the messenger god Hermes, whose epithet was Psychopompos.  It comes from the Greek word psyche, meaning soul, which has found its way into English in all sorts of compounds, including psychiatrist—a word which literally means “soul doctor” (iatros is Greek for doctor).  In a lovely bit of metaphor, psyche is also the Greek word for butterfly. 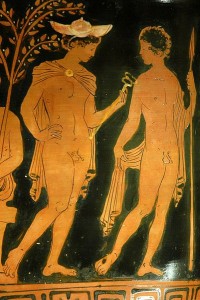 Hermes (at left) on a vase-painting

The pomp– part comes from the Greek for escort, or guide, and can refer to either a single escort, or an entire cohort, making it the root of our “pomp” in pomp and circumstance.  So, psychopomp literally means soul-guide. By the way, this word frequently provokes hilarity among my Greek students: “Dude, that guy was psycho pompous!”

Apocalypse.  This word comes from the Greek roots apo (away from, or un-), and calypto (cover, conceal).  So it literally means an uncovering, or, in the biblical sense, revelation.  The “calyps” part of apocalypse is the exact same root as the name Calpyso, the nymph from the Odyssey who holds Odysseus (sort of) against his will for seven years.  She is the opposite of revelation—a being who uses obfuscation and wiles to keep Odysseus with her, rather than helping him on his journey home. 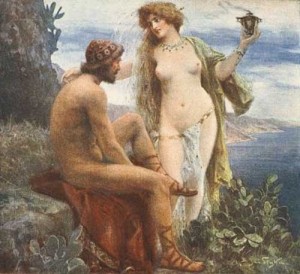 Pachycephalosaurus.  What could be better than giant lizards that bonk each other in the head?  If you answered “nothing,” then pachycephalosaurus is the dinosaur for you.  Pachy- means thick, or stout; cephal- means head and saurus is our old friend lizard.  Which makes pachycephalosaurus one hard-headed lizard.  These dinosaurs had a domed, extra-thick skull plate that, according to some scientists, they would use to batter each other with, kind of the way rams do.

Both pachy– and cephal– show up elsewhere in English.  Pachy- is part of “pachyderm” literally, thick-skin, another word for elephant.  Cephal– goes into all sorts of medical diagnoses like “encephalitis.”  But the important thing to remember, I think, is that there were dinosaurs who developed extra-thick heads because they liked to whack into things. 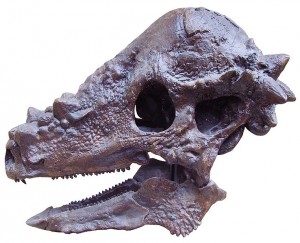 The skull of a pachycephalosaurus. Photo credit to user Ballista from English wikipedia

Gubernatorial, “relating to a governor,” is one of my favorite words, because its context is almost always serious, yet you’re still saying the word “goober.”  As a child it was classed in my mind with avuncular—another intimidating word that turned out to have a really easy meaning (uncle-ish).

Gubernatorial comes from the Greek kubernetes (koo-ber-nay-tays), which originally meant captain of a ship.  Over time, the “k” blurred with its close cousin “g” (both sounds made against the palate), and produced the goober sound that we all know and love.  Linguistically the “b” in the middle of the word is closely associated with “v” so it was just an easy step to “governor” from there.

By the way, if you’re looking for a factoid for your next cocktail party, try this: the honors society “phi beta kappa” is actually a Greek acronym for the following phrase: philosophia biou kubernetes—“Love of learning is the guide (captain) of life.”

Have a great week!