I’ve had a busy past few weeks on my US booktour, with lots of terrific events, and lots of wonderful things still to come.  In particular, I am thrilled to be going to Ann Patchett’s bookstore, Parnassus, on Tuesday for the kickoff of her First Editions club.  She is fabulous, and getting to see her and visit her store is a literary dream come true.  Then this weekend I get to hang out at the Books on the Nightstand Vermont Booktopia retreat, with a whole bunch of other book-lovers and authors.  After that, it’s on to California!

Unfortunately, amidst all this I haven’t had the chance to give Atalanta, my chosen myth of the week, all the attention she deserved.  So rather than short shrift that eminent lady hero, I thought I would push her off to next week, and have this week’s post be a bit different. 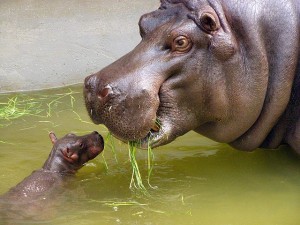 Not very horse-y, but pretty cute. Photo by Frank Wouters

For some time now, I’ve been thinking about doing a series about the delights of ancient Greek-derived English. When I first started studying Greek, one of my absolute favorite parts was realizing that so many English words had these old, secret roots.  Learning Greek was like being given a super-power: linguistic x-ray vision.  Or like in CSI, when they shine the blacklight on the carpet.  A silly, ordinary word like hippopotamus sprang suddenly to life as “river horse.” A terrible description, to be sure,  but a fascinating one.  Is that really how the Greeks thought of them?

I still love these Greek etymologies just as much as I did back then, and thought I would share five of my favorites. 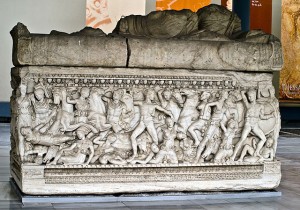 Amazons fight Greeks on the side of a sarcophagus in Thessaloniki. Photo by Anton Lefterov

Sarcophagus. By the time I got to my high school Greek class, this word and I were old friends.  I had been very fortunate as a child to live near the Metropolitan Museum of Art in New York City, and to have a mother who was excited to take me there.  My favorite exhibits were the Greeks, Romans, and Egyptians, and between the three I saw lots of sarcophagi. I had always assumed that the word was Egyptian, because it sounded mysterious to me, so it was a thrilling moment to realize it was actually Greek: from sark-, meaning flesh, and phag– meaning eating. The sinister name came from the fact that the sarcophagi were often cut from a type of limestone, which was thought to help “devour” the bodies.

When a person in the ancient world was ecstatic, she was actually possessed—so consumed by the god’s presence that she was out of her mind, or standing (stat-) outside (ek-) herself.  It’s interesting to me that the word has been now entirely stripped of those religious associations, and come to mean simply the most extreme and delirious type of happiness.

The ancient Greeks were lovers of the human form, especially when it was fit and naked.  Ancient athletes both worked out and competed in the nude, and the place where they exercised became known as “the naked place,” or gymnasium, from gymnos, the word for naked.  Something to contemplate next time you’re on the elliptical….

Petrichor is one of my favorite words of all time, because it gives a name to something we’ve all experienced: that smoky-mineral scent that rises from the earth after rain.  It’s derived from the Greek for rock (petr-) and divine blood (ichor).  By the way, that “petr-“ shows up elsewhere in English, in the word petrify, and the name Peter.  Jesus makes a clever play on words when he says that the apostle Peter is the rock upon which he will build his church. 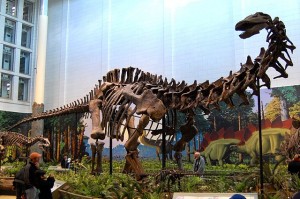 An apatosaurus skeleton, from the Carnegie museum. Photo by Tadek Kurpaski

I’m not sure what the cut off age is for growing up with Apatosaurus versus Brontosaurus, but I definitely missed it.  As a child, I loved my “Brontos” and was very sad to learn that they didn’t, in fact, exist.  It’s even sadder because brontosaurus has such a wonderful, evocative name: “thunder lizard.”  It used to make me shiver to imagine a creature so big its steps sounded like a storm.  But the new improved version, apatosaurus, has a pretty good name too: deceiving lizard.  The story goes that this is because paleontologists were “tricked” into mis-identifying it as brontosaurus, but apparently the truth is that the name apatosaurus is actually the older of the two (which is why it won out).  It derived from the fact that some of its bones were deceptively like the bones of other dinosaurs.

Have an ecstatic and etymological week!